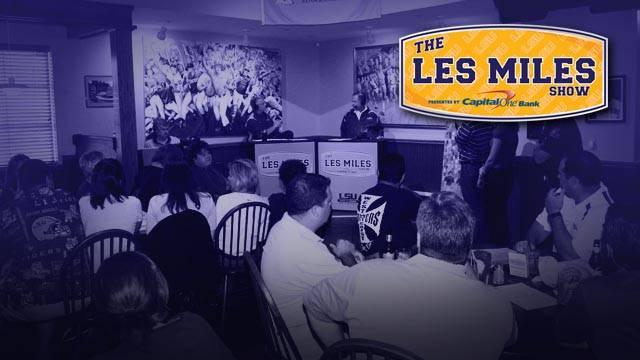 BATON ROUGE ? The Les Miles Show presented by Capital One Bank ? The Capital One Bowl Edition will be broadcast from the lobby at the Renaissance Resort SeaWorld on Thursday, Dec. 31 starting at 7 p.m. EST (6 p.m. in Baton Rouge).

The one-hour radio show, which is hosted by the Voice of the Tigers Jim Hawthorne, will preview LSU’s Capital One Bowl contest against Penn State.  LSU and Penn State will be squaring off a 1 p.m. EST on Jan. 1 in what will be only the second meeting between the two teams.

The show will be broadcast on the LSU Sports Radio Network and can be heard in the Baton Rouge area on Eagle 98.1 FM as well as across the region on WWL Radio (870 AM).

Members of the Geaux Zone on LSUsports.net will be able to watch the show live on the Internet or Tiger fans can listen to the live audio feed for free at www.LSUsports.net/live.

Admission is free of charge and space will be available on a first-come, first-serve basis. Other features of the show include an appearance by Mike the Tiger, the LSU cheerleaders and the pep band version of the Golden Band. LSU bowl posters will also been given away before the show.