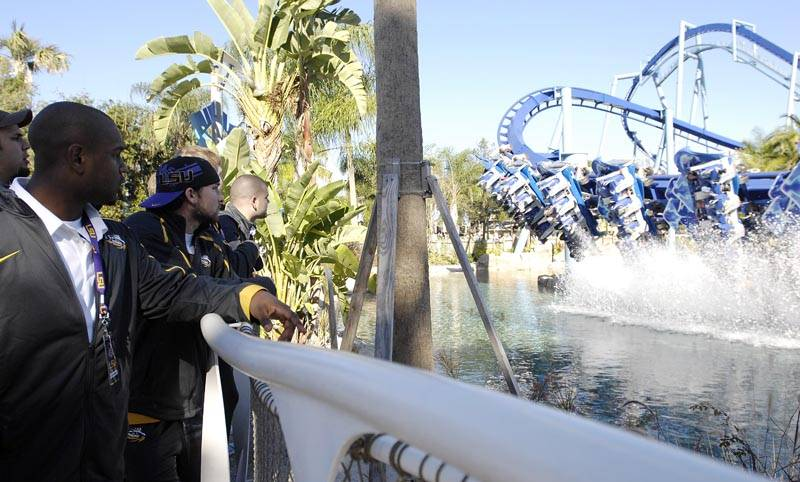 ORLANDO, Fla. ? The LSU football team completed practice early on Day 3 of Capital One Bowl Week Monday, and the team spent the afternoon visiting SeaWorld for a getaway from football.

“Oh my God. I can’t believe it,” said Trindon Holliday, senior running back/return specialist, after he got off the brand new ride Manta. “It was great. I am ready to get on it again.”

The team spent just over three hours in the theme park, and it seemed the most popular stops for the players were the two roller coasters ? Manta and Kraken ? and the caricature tent.

Several players were nervous before getting on the roller coasters, but some were excited to experience the loops and fast turns.

“I can’t wait. I am a big adrenaline rush kind of junky,” place kicker Josh Jasper said before riding on the Manta. “I’ve been looking forward to this since we got here.”

Even though he was excited about the ride, Jasper, who is known for being stoic on the football field, was nervous while waiting in line.

“I might be a little bit more nervous about this ride than I was for the game-tying kick against Arkansas,” he said. “It’s the kind of person I am though because I like both of them.”

Unlike Jasper who enjoys roller coasters and football, senior tight end Richard Dickson made it clear what he preferred after he walked off the Manta.

“I definitely would rather play football any day of the week,” he said while trying to regain his balance.

One group of Tigers rode on the front row together, and the group featured Patrick Peterson, Terrance Toliver, Perry Riley and Russell Shepard. When the four exited the ride they viewed the TV monitors that showed the players’ expressions during the ride, and immediately all four turned to Shepard’s image and laughed because Shepard had his hands together as if he were praying to get off the ride.

Other players made their way over to Kraken, and senior linebacker Harry Coleman was all smiles when he got off the ride.

“The Kraken was amazing with so many loops and turns, and that first drop on the Kraken is a beast,” he said.

Unlike some of the guys who were nervous before the ride or shaken up after it, sophomore quarterback Jordan Jefferson acted like a poised QB who is in control when he got off Manta and Kraken.

“I am feeling pretty good because I like roller coasters,” he said. “I wasn’t nervous at all because this is right up my alley.”

When the time came for the team to load up and head back to the hotel all the players were pleased with the experience to see the sights and rides.

“Today was a good day for the team to come out and have a little fun,” Holliday said. “We had a good time getting away from football for a couple hours.”

Look for link above to photos, video and extra content from Day 3 of Capital One Bowl Week for the Tigers. No. 13 LSU will take on 11th-ranked Penn State Friday at noon CT (1 p.m. ET) in the 2010 Capital One Bowl.

On how the experience at DisneyQuest was for him on Sunday …
“It was a great experience. I had a young girl named Jasmine. She was 13 years old. I got to know her a little bit. She is a nice girl. We just hung out, and we played video games and had fun together. It is something that I won’t forget. I know she won’t forget either. I told her to watch the game and hopefully I will do something good so she can smile.”

On this being the last game for his brother (Rahim Alem) …
“I have played so many years with my brother, and this might be the last game we play together on the same team ever. We are definitely going all out even for other seniors. We are going out for all of them. We ended them out on a good SEC note, and we are trying to end them out on a good bowl game. It is our final game together, so we will leave it all out.”

On if the team is enjoying the visit to Orlando so far …
“Yes, we are enjoying our visit. We have been having a great time out here.”