Tigers Use Day 2 'For the Kids,' Practice 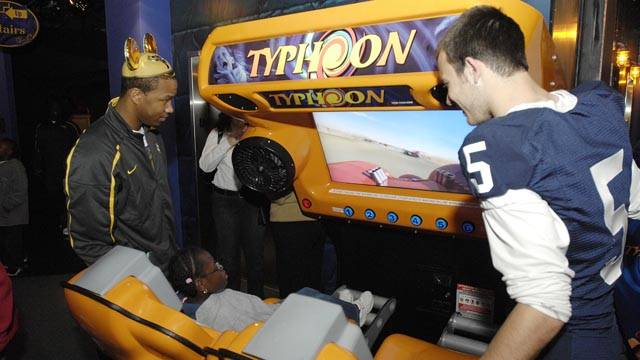 ORLANDO, Fla. ? The 13th-ranked LSU football team spent the morning of Day 2 in Orlando Sunday with underprivileged kids at DisneyQuest located at Downtown Disney West Side.

More than 250 disadvantaged children from around the area tagged along with players from LSU as well as the Tigers’ opponent in the 2010 Capital One Bowl ? Penn State. The two competitors in the Champs Sports Bowl, Wisconsin and Miami, also joined the “Day for Kids Festival” at DisneyQuest.

“The (Capital One) Bowl Committee makes it possible for the four teams here on site to interact with some disadvantaged young people in the area,” head coach Les Miles said. “It appears that everybody had a great time.”

Miles even took part in the fun and games as he played a video game or two on the first floor of the five-story complex.

“First, it’s great to give back to the community, and second, it’s fun to see these teams interact and enjoy each other,” Miles said. “Wisconsin and Penn State play against each other year in and year out, and they are standing in the same line with their kids. LSU and Penn State are in the same area enjoying each other. It speaks to what football is about ? sportsmanship.”

Coach Miles wasn’t the only one enjoying the fun video games and 3-D experiences. All the LSU players took time to act like a kid again.

“I had a blast today,” senior wide receiver R.J. Jackson said. “This was supposed to be for kids, and I felt like I was a kid in there.”

“We had a great time with the kids, but I think we liked it as much as they did,” he said. “Seeing the little kids enjoy it made it even better, but we had lots of fun.”

Several players used the time at DisneyQuest as an opportunity to mentor the child with whom they were matched.

“The guys and I just talked to the kids, trying to be a role model for them and have fun,” sophomore quarterback Jordan Jefferson said.

Thirteen-year-old Jasmine Clark was paired with junior safety Chad Jones, and she was able to see what it is like to be a football player at LSU. Clark followed Jones as he met with videographers for a shoot on the first floor of the complex, but when the shoot was over Jones made sure that he found some exciting games for him and the youngster to play.

“Where I come from in New Orleans there are a lot of kids who are less fortunate, so this made me proud to give back and hang out with Jasmine,” Jones said. “You never know how she or any of the kids might remember this, so we tried to make this the most fun as possible.”

As the players were leaving, Al Woods said goodbye and slapped hands with his new friend, and then he began to focus his attention to the day’s upcoming practice.

“It felt good to hang out with the kids, but now we have to focus and go back to work.”

LSU will face Penn State in the Capital One Bowl at noon CT (1 p.m. ET) Friday.

Check back later for a practice report update as well as photos and video from Day 2 in Orlando.

On if he is taking more of a leadership role leading into next season …
“I had to become a leader before the first game of this year. Now we are at the end of this season, and it is time for me to step up and lead us to a point where I will be leading us into my junior year. I have to be a leader and role model, so I will lead us the best way we can.”

On how he goes into a bowl game and speeds up his leadership …
“I just make sure we do the things that we have to do in practice, make sure our preparation is the way it needs to be to get ready for the game. We need to come out with a lot of intensity, follow the game plan and execute it as much as we can. Our preparation is looking really good. We are following the game plan pretty well, and we should be ready for the game.”

On if he is more involved with the game plan now than he has been before …
“Yes, sir. My reads are getting a lot quicker. I really started following things that coach is saying, just the little things that we need to focus on. The big things will come. We did some different things that we will do, and we should look pretty good offensively.”

On how he would describe his season so far …
“Our performance as a team has been pretty dominant. We had some ups and downs at times, but overall we are a 9-3 team with three losses to pretty good teams. We are trying to get our 10th victory in this next game, and it should be a good game.”

On the biggest area that needs improvement by him in the offseason …
“Just knowledge of the game and become smarter. You can always focus on that area. Make reads quicker. Watch a lot of film. Just areas that a quarterback should follow.”

On the drive against Arkansas that forced overtime and how it boosted his confidence …
“It boosted my confidence up a lot. It showed me that the two-minute drive isn’t easy. I focused on that, especially after the Ole Miss game, so I made sure I was ready for that drive and whenever it came I would be ready for it. When it came up I was fully confident before it even started, so I just had to make sure we put some points on the board to go to overtime.”

On how much different he feels going into the bowl game compared to last year …
“Yes, sir. Last year I was a freshman and that was my second game starting. I didn’t really know the offense fully, so this year I had a year of experience and have played in all our games. I know what to expect, so now I am focused on Penn State and trying to figure out the plays for the offense.”

On what he sees in the Penn State defense that has impressed him …
“They are very physical. They will pound you and try to slow you down as much as possible.”

On how different a player he is today from the opening day …
“On opening day I was a little nervous. That would have been my third game starting. I really hadn’t played that much, but now I am very comfortable. I have played in 11 games, so I know what to expect. I became more of a leader on the field. I know how to control the offense now. I know how to manage the game, so I am a lot smarter of a game manager now.”

On what he learned about himself throughout the season …
“I always hung in there, even when the offense had ups and downs. I came through and did as much as I could for this team and for everybody who was supporting us. We always stayed consistent in our effort and did as much as we could.”