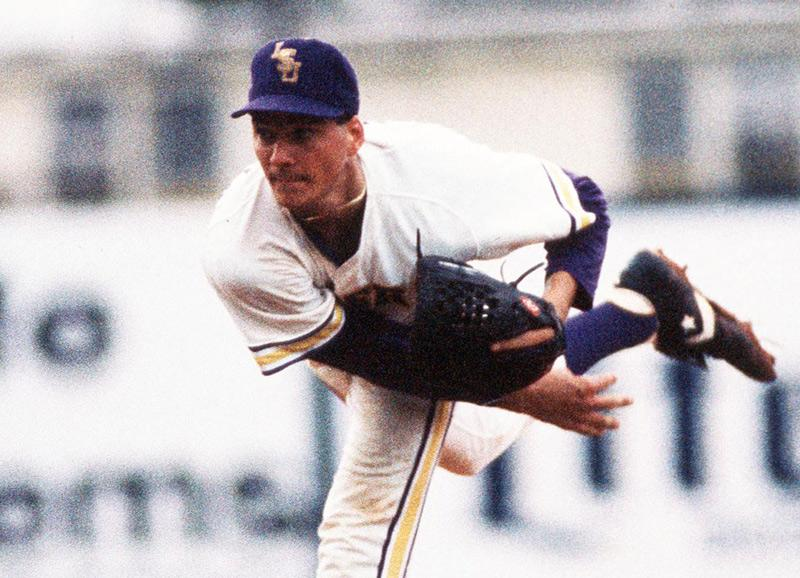 NATCHITOCHES, La. — Two former LSU Tigers have added their names to the prestigious list of members for the Louisiana Sports Hall of Fame Class of 2010.

Football player Lee Hedges who won acclaim as a high school football coach in Shreveport and LSU baseball great Ben McDonald are among the eight inductees who will enter the Louisiana Sports Hall of Fame.

They will be enshrined Saturday, June 26, 2010 in Natchitoches to culminate the June 24-26 Louisiana Sports Hall of Fame Induction Celebration.

The eight new inductees will raise the total of Hall of Fame members to 277 men and women honored since the first induction class  – baseball’s Mel Ott, world champion boxer Tony Canzoneri and LSU football great Gaynell Tinsley ? were enshrined in 1959 after their election a year earlier.

The 2010 Induction Celebration will kick off Thursday evening, June 24 with a press conference and reception. It includes three receptions, a Friday afternoon celebrity pro-am golf scramble at Oak Wing Golf Course in Alexandria, and a Saturday morning youth sports clinic hosted on the Northwestern State University campus. Tickets for the induction ceremonies and dinner, and golf entries, will go on sale in April, said Hall of Fame chairman Doug Ireland.

Also to be honored at the event will be the winner of the 2010 Dave Dixon Louisiana Sports Leadership Award and the recipient of the 2010 Distinguished Service Award in Sports Journalism presented by the LSWA. Those award recipients will be announced this spring.

In 28 years as a head coach, Hedges touched four of the most historic schools in Shreveport, serving as head coach at three (Byrd, Woodlawn and Captain Shreve) and taking each of those to the state championship game in the state’s largest classification. He guided Byrd to the 1956 state finals, Woodlawn to the 1965 championship game and Captain Shreve to the state title in 1973, the last time a public school from Shreveport won a state crown.

His career record stands at 216-92-5 (.698), still the most wins by a Shreveport-Bossier City coach.  He coached future NFL players as head coach at each school, including state Hall of Fame members Pat Studstill and Terry Bradshaw.  Caddo Parish Stadium was renamed Lee Hedges Stadium in October 2000.

Hedges lettered as a quarterback for the Tigers from 1949-51.

A two-time All-American and a 1988 Team USA Olympic gold medalist, McDonald is regarded as the premier player in the history of LSU baseball for his long list of achievements as a hard-throwing 6-7 right-handed pitcher for the Tigers.  He capped a magnificent 1989 season by receiving the Golden Spikes Award, given by the United States Baseball Federation to the nation’s most outstanding amateur player.

McDonald, who was also named National Player of the Year by Baseball America, The Sporting News and Collegiate Baseball, was the first player chosen in the amateur draft and made his major league debut with the Baltimore Orioles in September 1989. He played 10 years in the major leagues with the Orioles and Milwaukee Brewers before arm troubles ended his career.  An all-state baseball and basketball player at Denham Springs High School, he also played forward on the 1986-87 LSU hoops squad that advanced to the Elite Eight of the NCAA Tournament.

A 12-year NFL veteran receiver, Carrier was a 1989 All-Pro pick at Tampa Bay after an All-America career at Nicholls. The Church Point native played for Nicholls from 1983-86 and was a first-team Division I-AA All-American as a senior. Carrier is Nicholls’ all-time leader in catches (147), receiving yards (2,709) and touchdowns (24).

Curtis has coached for 39 years at John Curtis High School in River Ridge, posting a career record of 466-51-6 and a winning percentage of .897. He is the winningest coach in Louisiana prep football history, 101 ahead of Hall of Fame member Red Franklin from Haynesville, and is the second-winningest prep football coach ever in the nation.

Curtis has won a record 23 state titles, a record-tying five straight from 2004-08, making 14 consecutive state championship game appearances through 2009 and 25 overall appearances. Curtis has taken his Patriots to the state playoffs 35 times in his 39 seasons and has made the postseason every year since 1975.

One of only four men to win 400 or more basketball games at a Louisiana college, Vining took ULM to seven NCAA Tournament appearances and is the all-time coaching leader in the Southland Conference. He coached ULM to seven Southland titles, most of any coach in the history of the conference, and led his first team to a Trans America Conference tournament title in 1982 and his first NCAA Tournament appearance.

When he reached the 400-win plateau in 2005, he was one of only 29 active coaches in Division I to reach that milestone. He is a member of the ULM and Louisiana Association of Basketball Coaches Halls of Fame and the Southland Conference Hall of Honor.

Weatherspoon sparked Louisiana Tech to the 1988 NCAA women’s basketball national title as a playmaking point guard, played on Team USA in two Olympic Games including winning a gold medal in 1988, and became one of the best players in WNBA history.

She retired in 2004 after an outstanding WNBA career in which she was chosen an honorable mention member of the league’s All-Time squad. Twice an All-American for Louisiana Tech, “Spoon” was the 1988 Wade Trophy recipient in 1988, the year she rallied the Lady Techsters from a 14-point halftime deficit to defeat Auburn for the NCAA title. The school’s career leader in assists (958) and steals (411), she was chosen as the WNBA’s Defensive Player of the Year twice and was a four-time WNBA All-Star.

Wilson, a Raceland native, was a sensational three-time NCAA Division II All-American at Nicholls, establishing 42 school and Gulf South Conference records from 1975-79.  His school-record 2,569 career points ranks ninth in state history. He was only the 18th player in NCAA history below the Division I level to score 2,500 career points and also own a 25-point career average (25.7 ppg).

The Central Lafourche product, twice All-State in Class 4A (then the state’s largest classification) and the All-State MVP as a senior, was a consensus prep All-American after averaging 32 points. He was ranked one of the nation’s top 10 prospects by the BC Scouting Service. At Nicholls, he twice led the Don Landry-coached Colonels to Gulf South Conference titles and a pair of NCAA Division II Tournament appearances. He was named conference Player of the Year in 1977 and 1979, made All-GSC all four seasons, and was a three-time All-Louisiana and NABC All-South Central Region and All-District pick.