Tigers Arrive in Orlando, Prep for Capital One Bowl 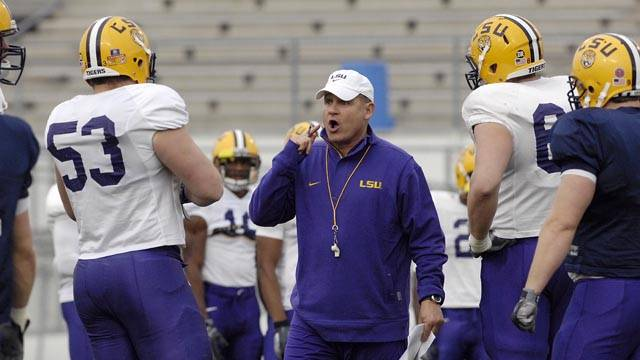 ORLANDO, Fla. — The 13th-ranked LSU football team arrived in Orlando via charter flight on Saturday afternoon and the Tigers then went through an abbreviated practice in preparation for the 2010 Capital One Bowl against Penn State set for New Year’s Day.

“We are excited to be in Orlando and look forward to the week ahead,” LSU head coach Les Miles said. “Penn State is an outstanding football team and we respect the tradition of their program. Our players look forward to competing against a team the caliber of Penn State and in a New Year’s Day bowl game that has significance. It was a great to be back on the practice field after the Christmas holiday. Our team is ready for the challenge ahead.”

After a three-day break for the holidays, the Tigers departed Baton Rouge Metropolitan Airport about 10 a.m. CT on Saturday and arrived in Orlando at 12:40 p.m. ET.

After a team meeting, the Tigers resumed its practice regimen at 4 p.m. at Dr. Phillips High School, located four miles north of the team hotel. The practice focused mostly on special teams. LSU will practice again at 3 p.m. ET Sunday.

Sunday’s schedule is highlighted by the Day For Kids Festival at Disney World from 10 a.m. to noon. The Tigers will join more than 200 physically challenged children for a morning full of food, fun and festivities. Penn State will also be on hand as will Miami (Fla.) and Wisconsin who play in Tuesday’s CHAMPS Sports Bowl at Florida Citrus Bowl Stadium.

Winners of four-straight bowl games under head coach Les Miles, LSU finished the regular season 9-3. The Tigers have played in a bowl game every year this decade, winning seven of those contests and posting a 4-0 mark in BCS games.

“We’re excited to be here in Orlando. It is going to be a fun week. We’re going to work hard this week in practice and get ready to play Penn State. It will be great to hang out with teammates at Disney World and all of the parks in Orlando, but we know we are here for football. We want to go out on a positive note this season.”

“I am looking forward to Penn State. That is why we are here. Everybody here wants to kick the New Year off right. I’m not the biggest fan of hotels, but we will get acclimated to staying several nights here. We have to stay focused on the game plan and get in a routine. I am looking forward to Disney World though. I hear they have a new rollercoaster in one of the parks. I am going to have to check that out.”

On having a shot at a 10-win season …
“When you look back on the year, we went through a lot of adversity but we have a chance to go out the right way. We are a strong team and we stayed together and have one more game together. We want to play well to carry some momentum into next year.”

On being named an All-American …
“It’s an honor. My dad always told me to play as hard as you can and play every play like your last. I always carry that swagger and a big heart because I love this game so much. I don’t like anyone to catch a pass when thrown my way. You have to take that mentality into every play and take pride in yourself.”