30 Years Ago: Tigers Send Coach Mac Out In Style 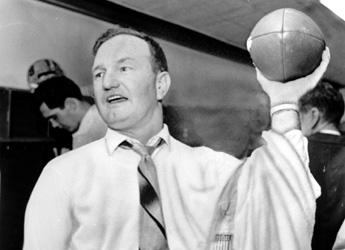 The football gods didn’t do Charles McClendon and his 1979 team any favors in the legendary head coach’s final season at LSU.

The Tigers’ schedule called for top-ranked foes Southern California and Alabama to pay a visit to Tiger Stadium as well as an undefeated Florida State team in the midst of arguably its best season in program history to that point under fourth-year coach Bobby Bowden. Despite giving those squads all they could handle, LSU fell short in all three contests.

The Trojans needed a last minute touchdown to leave Baton Rouge unscathed, while the Seminoles held on for a 24-19 win. Bear Bryant’s Crimson Tide mustered only three points against a stingy Tiger defense, but it was enough to come away with a 3-0 victory in the closest game en route to their 11th national championship.

“We’ve now played two No. 1 teams and unbeaten Florida State,” said a dejected McClendon following the loss to Alabama. “It doesn’t seem like justice. Someone up there musn’t like me.”

LSU gave McClendon an emotional victory in his final home game but ran into a buzz saw in the regular season finale ? a nationally-ranked Tulane squad that had won seven of its last eight games. The Green Wave would knock off the Tigers for only the second time in 31 years with a 24-13 win in the Superdome.

The Tigers, losers of three of their last five games and coming off a particularly disheartening defeat at the hands of their archrivals, appeared to have little momentum heading into their Tangerine Bowl (now the Capital One Bowl) matchup against a solid Wake Forest team.

But, Cholly Mac was determined to rally his troops for one last hurrah.

“When I came here, I never thought I’d be at LSU 27 years,” he told his team before the bowl game. “I knew this day would come. As you become a grown athlete, you push it back. But it’s here…

“I’ve never done anything. Anything I have you gave me, you and those assistant coaches out there. I’ll give my right arm for those people. And tonight I’m asking you to do the same thing for them. There’s no tomorrow…God bless you all.”

And his players responded like there was no tomorrow.

LSU stormed onto the field and overwhelmed the Demon Deacons from the opening kickoff. Led by quarterback David Woodley, the Tigers jumped out to a commanding 24-0 lead as the senior scampered for a pair of touchdowns and threw for another to splitback Jerry Murphree. Meanwhile, the Tiger defense stifled Wake Forest’s offensive attack in the first half, holding their opponent to a mere 13 yards rushing and three points and forcing three turnovers.

The Demon Deacons put together an 8-play scoring drive to open the second half and cut the deficit to 24-10, but the Tigers’ relentless defense shut them down from that point forward and picked off two more errant throws.

Woodley, who threw for 199 yards and a touchdown and rushed for 68 yards and two more scores, was named the Tangerine Bowl Most Valuable Player. McClendon walked away with the 137th win of his tenure, which remains the most in LSU history.

“This all was a thrill right up to the last moment,” the Tigers’ outgoing coach said after the bowl victory. “I’m the richest man in the world with all my friends, all my players and all my coaches.”

McClendon’s 1979 team will not be remembered as one of his best squads, but the late coach regarded that squad as a special group for its ability to fight through adversity despite its shortcomings.

“People are always asking me what team I remember most,” McClendon said that season. “Now I can tell them. I will remember this team because they’ve done more with less than any of the others. They’ve milked their ability dry game after game, and I’ll never forget ?em.”