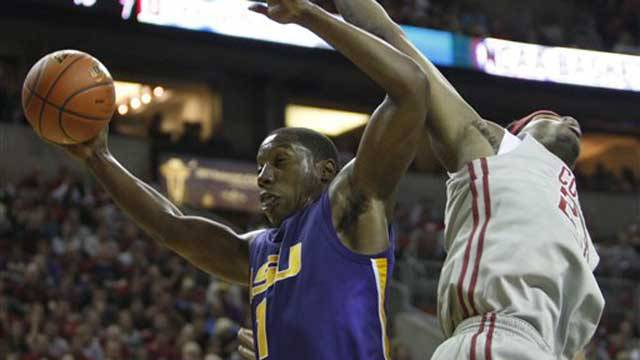 SEATTLE, Wash. ? A game that seemed to have an ebb and flow only from one free throw line to the other turned into  a down to the wire thriller that the LSU Tigers came up just a big short of a huge road win as the Washington State Cougars hung on in overtime to win the Cougar Hardwood Classic, 72-70, in overtime before a record crowd of 15,341 at KeyArena.

The teams combined to shoot 67 free throws in the contest with LSU 18-of-27 on the night and Washington State 31-40. Ironically, LSU’s second leading scorer, Tasmin Mitchell, who recorded his fourth double double of the year, failed to get to the line at any point of the game.

LSU watched State go to the line and make 17-of-18 free throws in the opening half, but kept Klay Thompson their leading scorer averaging over 20 points a game, to just six first half points and with the tempo how the Tigers would like it, LSU trailed just 36-30 at intermission.

But Spencer, fighting cramps in his legs, tied the game at 60 with 3:04 to play and after two WSU misses and an LSU miss and a turnover, LSU got the ball back under a minute after a missed three pointer by the Cougars. Spencer hit another jump shot to give LSU a 62-60 lead. Thompson missed another three-pointer and Chris Bass rebounded and was fouled with less than 20 seconds to play.

In the overtime, LSU had its only lead 37 seconds in on an Aaron Dotson jumper to make it 64-62. Then Reggie Moore hit an in the paint jumper and was fouled by Chris Bass and Moore’s subsequent free throw gave WSU the lead for good at 65-64. That would be the only field goal in overtime for Washington State as they would go 8-of-11 from the free throw line the rest of the way.

Down five, with 1:11 to play, Tasmin Mitchell brought the ball straight down the middle of the floor and hit a three pointer to cut the game to 70-68. Spencer fouled Thompson who made two free throws to make it 72-68 with 48 seconds left. Spencer took the inbounds and drove the length of the floor to make it 72-70.

On the next possession, Thompson charged, giving LSU one last shot with nine seconds to play. Bo Spencer ended up with a three point attempt that missed ending the contest.

Spencer led LSU with 23 points, while Mitchell had 18 points and 14 rebounds, including eight offensive, in 45 minutes. Dotson had 11 points playing in his home town for the first time as a collegiate player, his second straight game in double figures. The Tigers, after a five-game winning streak fall to 8-3.