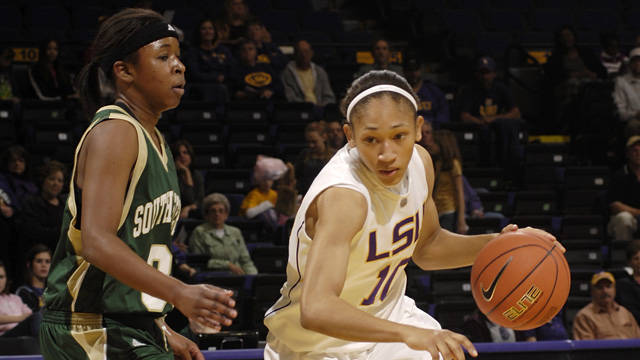 BATON ROUGE — The 11th-ranked LSU women’s basketball team rebounded from its first loss of the season by winning its 33rd consecutive game versus an in-state opponent with a 72-27 victory over Southeastern Louisiana on Tuesday night at the Pete Maravich Assembly Center.

The Lady Tigers (10-1) reached double-digit wins on the year, becoming the quickest 10-win LSU team since the 2004-05 squad won the first 13 games. That team won its 10th game on Dec. 18, 2004 against Southwest Missouri. LSU also remained undefeated this decade against teams from the state of Louisiana.

The Lady Lions (6-6) saw their four-game winning streak come to an end. Southeastern dropped its 20th straight game to LSU and remained winless against the Lady Tigers since Feb. 24, 1981.

“I think anytime you win by 45 points after a loss on the road is a good win,” LSU head coach Van Chancellor said. “I was a little bit worried we would be breaking for Christmas too soon. We did what we were supposed to, and that’s all we can ask for. I thought Allison Hightower and LaSondra Barrett came out and played a heck of a game, especially Allison in the first half and LaSondra in the second half.”

With the win, Chancellor now stands at 499 career collegiate victories, putting him one shy of joining the 500-win club. The Hall of Famer, who is in his 22nd year at the collegiate level, also won 211 games in 10 seasons with the WNBA’s Houston Comets. Chancellor won his 60th game at LSU in now his third season.

Senior preseason All-American Allison Hightower led all scorers with 16 points ? her sixth straight double-figure game ? while tying a career high with five steals. Sophomore forward LaSondra Barrett registered her first double-double of the season and third of her career with 11 points and 10 rebounds in 20 minutes. Barrett also tied a career high with five assists.

“Getting a double-double in 20 minutes of playing time is pretty good,” Chancellor said. “You play 17 minutes and score 16 points is a point a minute. That’s pretty darn good.”
Both teams struggled from the floor as LSU shot 34 percent to Southeastern’s 23 percent. The Lady Tigers scored 30 points off turnovers and made 23-of-33 free throws. Meanwhile, the Lady Lions did not manage to make it to the free throw line one time Tuesday night. It was the first time in school history an opponent did not attempt a free throw in a game. The previous low was one set by Louisiana-Lafayette on Jan. 30, 2001.

LSU opened the game with a 17-0 run as Southeastern committed eight turnovers and missed its first nine shots in the first nine minutes. Hightower accounted for the first eight points when she buried back-to-back 3-pointers on the game’s first two possessions followed by a pair of free throws.

Taylor Turnbow then contributed the next six points on two jumpers and free throws, and freshman Adrienne Webb culminated the run with the first of three 3-pointers on the night. The Lady Lions finally scored off an LSU turnover that led to an easy jumper in the lane by Kim Edmonson with 11:38 to play in the first half. SLU nearly went the first nine minutes without scoring.

LSU led by as many as 26 points in the first half when Webb drained her second 3-pointer at the 3:31 mark. The Lady Tigers took a commanding 35-11 advantage into the locker room and increased the lead to 37-11 on a pair of Barrett free throws.

Hightower accounted for her final points on 3-pointer and two free throws in the first two minutes before being lifted from the game with 16:50 left to play. Webb, who finished with 11 points and a rebound shy of a double-double, added another 3-pointer with 5:58 on the clock that extended the lead to 66-25.

Freshman Bianca Lutley tallied the final bucket in the final minute that gave the Lady Tigers their largest lead, 72-27.

LSU breaks for the Christmas holidays before returning to practice on Dec. 26. The Lady Tigers then play their final non-conference game of the season at No. 13 Xavier (Ohio) on Dec. 30 in Cincinnati.

Opening statement…
“It was a good win for LSU tonight. I’m really pleased with how we played, and I’m ready to break for Christmas.”

On team attitude in tonight’s performance after loss to Nebraska…
“I think anytime you win by 45 points after a loss on the road is a good win. I was a little bit worried we would be breaking for Christmas too soon. I thought we played tonight. We were supposed to win 72-27; we did. We did what we were supposed to, and that’s all we can ask for.”

“I thought Allison Hightower and Lasondra Barrett came out and played a heck of a game, especially Allison in the first half and LaSondra in the second half.

On LaSondra Barrett‘s double-double and Allison Hightower‘s scoring performance…
“Getting a double-double in 20 minutes of playing time is pretty good. You play 17 minutes and score 16 points is a point a minute. That’s pretty darn good.

On 17-0 lead at the beginning of the game…
“We wanted to start the game aggressively and be patient on offense. Those shots came just came on offense. I was open, so I shot them. We definitely wanted to get after them on defense.”

On tonight’s performance…
“I tried to come in and not get in foul trouble because that’s what got us in trouble against Nebraska. We also focused on defense. We knew Southeastern was going to make us run. I just tried to box my man out and play hard and hope for a deflection. When I realized my shots weren’t falling, I tried to look for open people or contribute in another way.”

Opening statement…
“I am embarrassed at the performance of my team tonight. LSU had something to do with that because they’re athletic and pretty tough defensively, but I’d have liked to see a better effort on our part. Now it’s Christmas. Merry Christmas.”

On LSU starting the game with a 17-0 lead…
“They locked up defensively and we weren’t able to get open. We didn’t use our post to help our guards get open and vice-versa. We just didn’t go meet our passes. I didn’t feel like we were prepared from the tip, and the tempo got off on the wrong foot for us. We kind of reeled, and then we had to figure out what to do. I’m not sure we did that, but we played for 40 minutes.”

On coming into the game with a four-game winning streak…
“Yeah, I felt like we had competed (in previous games). We obviously knew the level of competition we had competed against was not anywhere close to what we were going to see tonight. You hope that some of the confidence carries over, but I feel like we reeled from the tip. We couldn’t quite get our footing. What could go wrong for us did, thanks to LSU’s defense.”

On Allison Hightower and LSU…
“Has she not graduated yet? I’m glad she’s a senior. No, best of luck to her. They’ve got a very nice team, and they rebounded nicely after a loss to Nebraska. We were the whipping boy tonight, so we’ve got to figure out how to go into the gym and make somebody else our next one.”