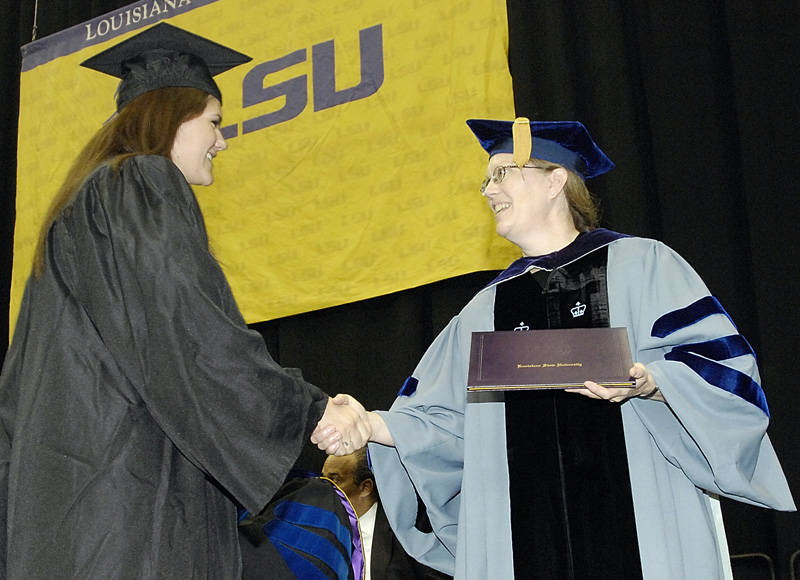 BATON ROUGE — The LSU soccer program has been honored for its performance on and off the field throughout the 2009 calendar year, and it earned distinction once again while posting a perfect graduation rate of 100 percent for its student-athletes graduating in 2009.

The soccer team is one of two athletic programs on campus to record a graduation rate of 100 percent for 2009 as it joins the men’s track and field team in accomplishing the feat.

Three Tigers received their degrees during commencement ceremonies in 2009, including Melissa Clarke in mass communication, Jackie Moseley in management and Valerie Vogler in mechanical engineering.

“We are very proud of Melissa, Jackie and Valerie for the way they have represented our program both on and off the field throughout their careers here at LSU,” said LSU head coach Brian Lee. “They certainly represent everything we look for in a student-athlete when they join our program. We are proud of each of them for the commitment they’ve made to work toward their degrees.”

Lee said that the work of the Cox Communications Academic Center for Student-Athletes plays a crucial role in the academic success of his student-athletes year in and year out.

“We appreciate the hard work and support that Carole Walker and the staff at the academic center provide our athletes as they pursue their degrees while competing at the highest level on the field,” Lee said. “Our athletes are provided every opportunity to make sure they leave LSU with their degree and all of the tools they will need to succeed in whatever career path they choose to pursue.”

Kenneth Miles, the executive director of the Cox Communication Academic Center for Student-Athletes, echoed Lee’s comments in commending the work of LSU’s student-athletes in 2009.

“We at the Cox Communications Academic Center for Student-Athletes are extremely proud of each one of our student-athletes. We’re very pleased that they are now graduates of LSU,” Miles said. “Simply put, 100 percent is perfection. It’s what we demand and what we expect.”