Getting to Know: Kenneth Miles 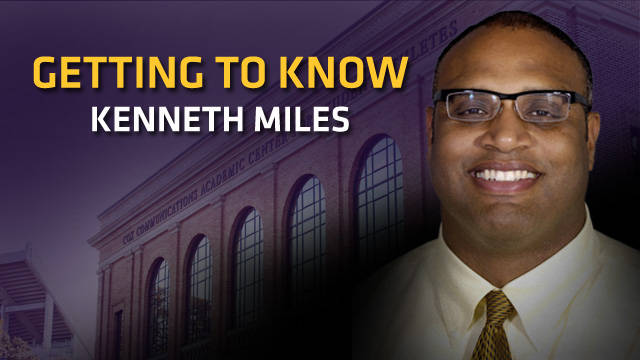 BATON ROUGE ? LSUsports.net gets to know Cox Communications Academic Center for Student-Athletes [CCACSA] Executive Director Kenneth O. Miles, who joined the Tigers in October 2008. In his short time with LSU, Miles has already created advisory boards for Professional/Career Development, Student Learning, Health & Wellness, and Diversity, Inclusion, and Civic Engagement as part of his three-year strategic plan for the Center. He also has been instrumental in the complete redesign of the Center’s website, http://www.acsa.lsu.edu, which launched earlier this week.

Kenneth O. Miles lives his life according to the motto he adopted as a student at the all-male Gonzaga College High School in Washington, D.C.: Be a man for others.

Miles was committed to the concept of being a well-round student-athlete, emphasizing the importance of academic prowess off the field as well as championship results during his time at the University of Virginia. He used his stature in those roles to be a positive influence on his teammates and the Charlottesville community by mentoring youths through the Big Brother program and befriending an elderly woman through the Adopt-A-Grandparent program.

“When you get involved, you develop strong relationships with people and share part of yourself with them,” Miles said. “I enjoy having an impact on people.”

Miles earned a bachelor’s degree in studio art and a master’s degree in social foundations of education as a four-year letterman in football. On the gridiron, the Cavaliers went 33-14-1 highlighted by the program’s only 10-win season en route to 1989 ACC Co-Champions and a berth in the Sugar Bowl. He also played in the 1990 Citrus and 1991 Gator Bowls for UVa.

After graduation, Miles returned to his high school, Gonzaga College, where he was an art teacher from 1993-95 before returning to serve as the Academic and Lifeskills Coordinator to student-athletes at Virginia for three years.

Miles arrived at Syracuse in 1997 as the Director for Academic Support. Under his academic direction, the SU football program notched a perfect 100 percent graduation rate in 2000 along with a 93 percent rate during the 1999 and 2001 seasons. Those marks earned the institution a trio of American Football Coaches Association Achievement awards.

Miles moved into Assistant Dean for Student Services in the iSchool in addition to the Executive Director for Diversity Enrollment Management and Graduate Admissions starting in 2002. He created the Kenneth O. Miles Scholarship at Syracuse University through the Our Time Has Come Initiative. The scholarship is designed to assist a Syracuse University student of color cover the costs of a college education. Impassioned by his own doctoral research in Cultural Foundations of Education and his interactions on campus, Miles defines this Scholarship as his contribution to a larger societal, educational and economical problem.

Miles joined the LSU family in October 2008 as the Executive Director of the Cox Communications Academic Center for Student-Athletes. The Center continues to maintain certification from the prestigious College Reading and Learning Association [CRLA] under Miles.

There are future plans to create a multi-purpose technology integrated conference room, expound on 3 year plan, and upgrade the Cox Communications Academic Center.

“It’s truly an honor to work with such a talented team of educators,” Miles said. “We have the best job in America at LSU because every day we come to work we can impact someone else’s life because we are responsible for making societal changes when necessary.”