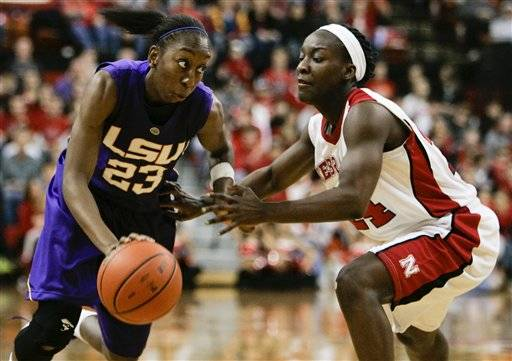 LINCOLN, Neb. — No. 18 Nebraska jumped out to an early 21-6 lead and then put together 12-2 run early in the second half to deal the fifth-ranked LSU Lady Tigers their first loss of the season by a score of 77-63 in front of 7,717 fans at the Devaney Center on Sunday afternoon.

LSU (9-1) saw its nine-game winning streak come to an end after beginning the season with its best start since 2005. The Lady Tigers and Huskers were one of 12 unbeaten teams entering play on Sunday. Nebraska (11-0) is off to its best start in school history and has now won all seven of its home games by a double-digit margin.

“Give Nebraska all of the credit in the world,” LSU head coach Van Chancellor said. “That is not just a good basketball team but a great one. Their defense was outstanding on us all night. Nebraska is for real. The Big 12 better look out. They came out ready to play and the crowd energized them. They took away everything from us and they weren’t going to let Allison Hightower beat them.”

LSU had boasted one of the top five scoring defenses in America, allowing only 44.2 points per game. The Lady Tigers had given up less than 35 points in each of its past three games, but Nebraska’s senior-laden team and size proved to be too much as the Huskers poured in 41 points in the first 20 minutes.

Kelsey Griffin, a two-time first-team Big 12 selection, was spectacular on both ends of the floor with a game-high 30 points and 14 rebounds. Griffin posted her fourth double-double of the season and 24th of her career before a Nebraska record crowd for a non-conference game.

“Griffin looked like an All-American out there,” Chancellor said. “We couldn’t stop her. She scores 30 points with 14 boards. That’s a great game. She’ll be a heck of WNBA player too. She has all of the skills.”

Senior guard Allison Hightower led LSU with 15 points, but the reigning Southeastern Conference Co-Player of the Week was held to four points in the second half. Hightower has scored in double-figures in five straight games. Junior guard Katherine Graham added 12 points.

Nebraska shot 50.0 percent from the floor for the entire game and was a blistering 63.6 percent (14-of-22) in the first half. The Lady Tigers, who trailed by as much as 15 in the first period, were able to stay close thanks to 11 first-half offensive rebounds and 17 second-chance points.

After trailing 5-2 in the first three minutes of the game, LSU quickly faced its largest deficit of the season when Nebraska mounted a 19-2 run. The Lady Tigers went four minutes without a field goal and Griffin and Dominique Kelley combined for eight points during the span. Cory Montgomery nailed a 3-pointer, and Chancellor was charged with a technical foul on the next LSU possession.

LSU was plagued by foul trouble all game as LaSondra Barrett picked up two quick ones in the first five minutes. However, the Lady Tigers clawed their way back into the contest as Hightower made two jumpers on consecutive trips down the floor. Graham’s bucket at the 4:04 mark put LSU within six at 32-26.

With the score 41-34 in favor of Nebraska at the half, Hightower pulled LSU closer with the first shot of the second half. The five-point deficit would be as close as the Lady Tigers would get. The Huskers put together a 12-2 barrage over the next four minutes, culminating with another Montgomery 3-pointer at the 16:16 point.

Nebraska led by as many as 19 points midway through the second half and coasted the rest of the way to remain unbeaten.

LSU returns home via commercial flight on Monday before taking on Southeastern Louisiana at 7 p.m. CST Tuesday in the Maravich Center. The contest will be the final non-conference home game for the Lady Tigers and the last overall home game until Pack the PMAC 14 on Jan. 10 against defending SEC champion Auburn.