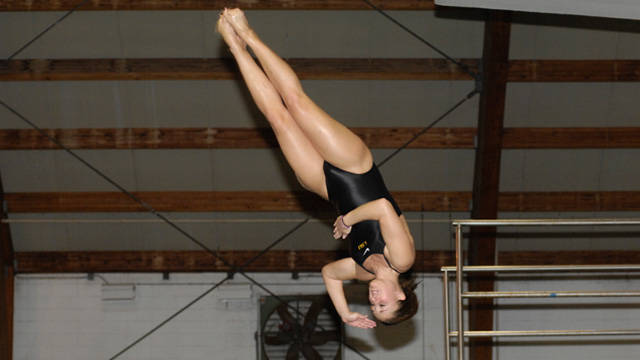 TUSCALOOSA, Ala. — LSU sophomore divers Brian Gemberling and Matt Vieke each posted top-five finishes, and freshman Elle Schmidt reached the finals of the women’s three-meter springboard to lead the Tigers on the second day of Alabama’s Christmas Diving Classic Friday.

Gemberling delivered a fourth-place finish in the men’s one-meter, his second top-five finish in as many days, as the Levittown, Pa., native scored 311.85 points on six dives in the final round. Vieke placed fifth in that competition with a 302.45 mark.

Schmidt qualified for her first final of the meet, registering seventh-place in the women’s three-meter with a score of 257.25 after totaling 265.20 points in the preliminaries.

Furthermore, freshman Rebecca St. Germain took first-place in the consolation final of the women’s three-meter, tallying 304.30 points, while fellow freshman Jesse Lyman finished ninth in the prelims of the men’s one-meter with a mark of 239.00.

“I thought again, we had some nice individual performances,” LSU diving coach Doug Shaffer said. “Brian finished fourth, and Matt did a nice job on one-meter. Elle made the finals in her event. Certainly, we have some work to do, but I’m excited with how we performed, and I think we are on target with where we need to be at this point.”

The Christmas Diving Classic will conclude Saturday with the men’s and women’s platform competitions, which begin at 11:15 a.m. (CST). Live results are available at www.divemeets.com.