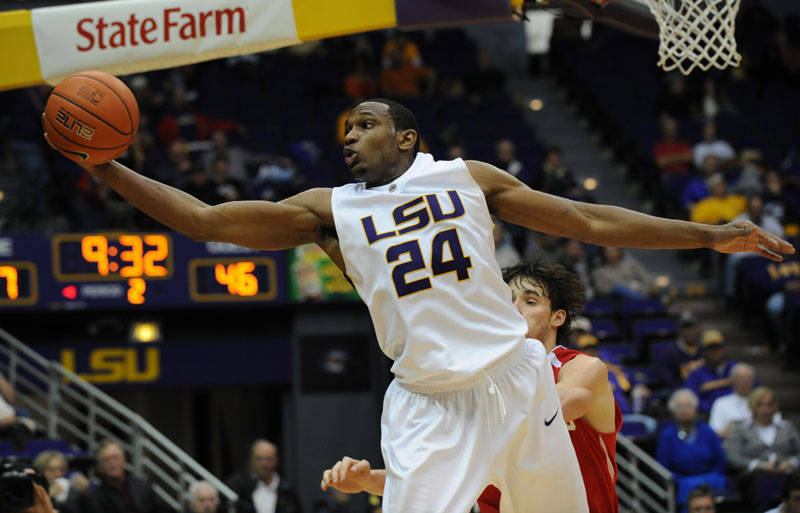 BATON ROUGE ? The LSU men’s basketball season looks to remain unbeaten at home when they conclude the 2009 portion of their home schedule Saturday when they host the Rice Owls of Conference USA in a 1 p.m. contest at the Pete Maravich Assembly Center.

Tickets for the contest are available online at LSUsports.net and go on sale at the upper concourse ticket windows of the Maravich Center beginning at 11:45 p.m.

“Santa Mike” will be on hand from 11:45 a.m. to 12:45 p.m. prior to tipoff to take holiday pictures with kids 14 and under and these pictures will be shown during the game on the video board and after the game on LSU Sports.net.

Following this game, LSU (7-2) will be on the road in Seattle to face Washington State on Dec. 22 (CBS College Sports) and in Cincinnati to play Xavier on Dec. 29 (ESPNU), before returning home to face Utah on Jan. 2, 2010.

LSU is 7-0 this season in the Maravich Center and was able to keep alive that streak alive in the final minute Thursday night by rallying to defeat Nicholls State, 63-60. It was Tasmin Mitchell‘s three pointer with 36 seconds left that lifted LSU to a 62-60 lead and kept alive LSU’s 21-year plus win streak against Louisiana schools in games played at the Maravich Center. That streak reached 79 straight games dating back to the start of the streak on Dec. 8, 1988.

Mitchell had, according to Coach Trent Johnson, “his most complete game since I’ve been here” as the Denham Springs senior hit 11-of-14 field goal attempts including all three treys. He also had no turnovers in 40 minutes of play. Storm Warren had his seventh double double of the year with 13 points and 11 rebounds and Bo Spencer added 12.

“I have to believe without looking at the tape that Tasmin made every crucial play for us throughout the game,” Coach Johnson said after the contest. “We got frustrated at times and lost our composure. As a group, we had a lot of careless turnovers (17), but I don’t want to take anything away from Nicholls State. I watched them play Oklahoma. Oklahoma got separation with about seven minutes to go. Washington State was a close game.

“We will … get ready for a different type of matchup (Rice) with true posts and a more conventional basketball team. From a matchup standpoint, I think we will play our big guys. I played Dennis (Harris), and I was reluctant to put him in. He hadn’t practiced at full speed in a while. Obviously, kids think they can play, so hopefully he won’t tighten up.”

Harris was making his first appearance after missing two games with a back problem he aggravated in practice earlier in the month. He played five minutes and made his lone field goal attempt.

Rice is 5-4 on the season, coming off a 70-57 home win on Wednesday against Santa Clara. Rice forced a season-high 23 turnovers in the win and had 17 steals that all lead to the Owls scoring 27 points off turnovers. The win over Santa Clara was the Rice program’s 1000th all-time victory.

LSU assistant coach Brent Scott remains the second leading scorer and rebounder all-time in Rice basketball from his playing days from 1990-93. Scott scored 1,906 points in his four years and pulled down 1,048 rebounds. LSU Coach Trent Johnson served as an assistant at Rice during Scott’s playing days.

The teams first met in 1916 and Rice is the only blemish on LSU’s 1935 mythical national championship season. This will be the 41st game in the series that is having its first renewal in 32 years.

Mitchell, having scored 101 points in the last four games, is averaging 18.0 a contest to lead the Tigers. He is fourth in the league in scoring and rebound s (8.4). Warren is second on the team in scoring at 15.9 points a game and a league best 11.4 rebounds a contest, while Spencer checks in with a 15.1 points per game average.