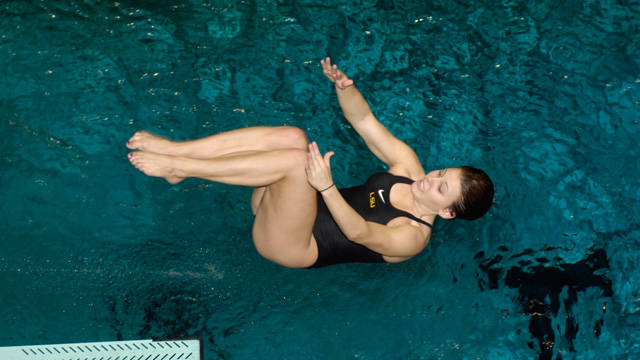 TUSCALOOSA, Ala. — LSU divers Brian Gemberling and Rebecca St. Germain each delivered top-five finishes in their respective springboard events to spearhead the Tiger efforts during the opening session of the University of Alabama’s Christmas Diving Classic Thursday.

Gemberling advanced to the finals of the men’s three-meter competition with a six-dive total of 350.05 in the preliminaries before tallying a final-round score of 361.50 to claim fifth overall. St. Germain placed fifth in the women’s one-meter with her mark of 271.55 after reaching the finals with a 263.15 prelim score. Sophomore Matt Vieke also qualified for the finals, finishing seventh with a score of 314.10.

In addition, freshman Elle Schmidt won the consolation final of the women’s one-meter with a 244.50 score, and fellow freshman Jesse Lyman posted a 220.15 mark in the men’s three-meter prelims.

“We performed very well today,” LSU diving coach Doug Shaffer said. “Going up against this level of competition, it was really good to have three Tigers reach the finals, and Elle just missed qualifying for the final. Brian was only a few points shy of a personal best, and Becca did a great job, especially considering she’s just coming back from surgery.

“We compete in this invitational because it gives us a chance to go head-to-head with some top-notch divers, and I was very pleased with our efforts today.”

The men and women will switch boards for Friday’s action, which will begin at 10:45 a.m. (CST). Live results can be accessed at www.divemeets.com.