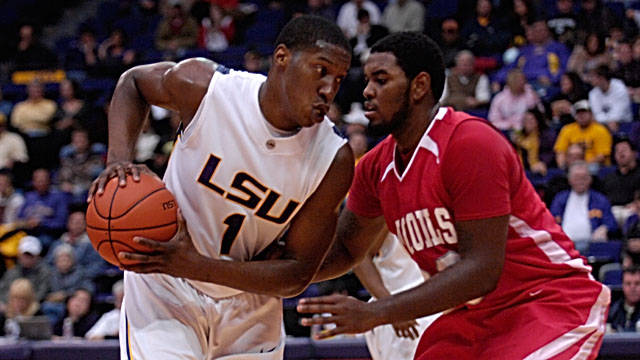 BATON ROUGE ? Tasmin Mitchell connected for 15 of his game-high 27 points in the second half, including the go-ahead three-pointer with 36 seconds left as the LSU men’s basketball team grinded out a 63-60 victory Thursday at the Pete Maravich Assembly Center.

Mitchell posted his fourth consecutive 20-plus scoring performance on 11-of-14 shooting. He also secured six rebounds to go along with three assists. The last time a LSU player reached that feat was Marcus Thornton when he strung together five 20-plus efforts from February 14-28 last season.

Storm Warren turned in his fourth straight double-double and seventh of the season with 13 points and 11 rebounds. Warren also sunk 3-of-4 free throws in the final 62 seconds.

Bo Spencer added 12 points and four assists as the Tigers (7-2) shot a season-best 58.1 percent from the floor and outrebounded Nicholls by a 31-24 margin.

LSU moved to 5-0 when Mitchell, Spencer and Warren all reach double figures this season and improved to 27-2 in the Trent Johnson era when holding its opponents under the 60-point plateau. The Tigers also pushed its home winning streak to 79 games against in-state schools dating back to December 1988.

A 10-3 finishing kick gave Nicholls a 31-27 advantage heading into the locker room as both teams shot 50 percent from the field in the opening stanza. The Tigers fired back with 12 of the first 17 points to start the second half aided by a pair of Spencer triples to grab a 39-36 lead with 14:15 remaining.

Nicholls State rode Anatoly Bose to 24 points as his 16-foot jumper gave the Colonels a 60-59 edge with 48 to go before Mitchell buried a three-ball 12 seconds later from the right wing.

LSU wraps up its five-game homestand Saturday against Rice. Tip-off is set for 1 p.m., and the game will be televised by Cox Sports Television.

The game also can be heard live on the LSU Sports Radio Network (New Country 100.7 FM The Tiger in Baton Rouge) and online at LSUsports.net in the Geaux Zone.

Opening statement …
“It seemed that before it reminded me of the same game last year. I thought for the most part that we were fortunate to win. Our best player (Tasmin Mitchell) pretty much put us on his back. That is probably his most complete game since I’ve been here in terms of going 11-for-14 with his shots, 3-for-3 on his threes and 2-for-3 on his free throws. I have to believe without looking at the tape that Tasmin made every crucial play for us throughout the game. We got frustrated at times and lost our composure. As a group, we had a lot of careless turnovers, but I don’t want to take anything away from Nicholls State. I watched them play Oklahoma. Oklahoma got separation with about seven minutes to go. Washington State was a close game.

“We have to come back tomorrow. We will walk through some stuff and watch video tape on Rice and get ready for a different type of matchup with true posts and a more conventional basketball team. From a matchup standpoint, I think we will play our big guys. I played Dennis (Harris), and I was reluctant to put him in. He hadn’t practiced at full speed in a while. Obviously, kids think they can play, so hopefully he won’t tighten up.”

On Tasmin Mitchell‘s last shot …
“We were going four up. Obviously, I knew they were going to double up or stretch Bo (Spencer) on the long ball. We set Tasmin in the four and didn’t roll. I told him a couple of times last year when we utilized him and Marcus (Thornton) that I wanted him to set it in a spot. The execution was sloppy, but he took it upon himself to make a nice play. They did a good job of taking us out of stuff and getting us out of rhythm. What I mean by that is our execution is good and crisp, but people were playing off Chris (Bass), Aaron (Dotson) and Eddie (Ludwig). They were trying to shade Storm and take his left shoulder away. He stepped off the post and made some nice mid-range jump shots. The only thing guys can do that are struggling offensively is continue to shoot the ball aggressively and have a calm mentality.

“I thought Zach (Kinsley) did a good job of not being timid, but even with Zach, when it’s not an open jump shot teams make him put it on the deck. That’s what you saw late, and then he has to try to get the ball back to Bo. That’s the offensive side. Defensively, I thought Chris Iles came in the game averaging six or seven, but we have a lot of breakdowns defensively. Chris lost sight of him a lot of times and got beat off the point.”

On Tasmin’s leadership role …
“He is our best player. He knows for me when you are my best player, regardless of what the call is, you have a green light to break away from execution and make a play. Bo is in that regard too when he is playing well. For us, when we are on the half court, we run stuff and set good screens and go inside out. What he is doing really well the last three games is moving from the three to the four. A lot of times that can take a guy out of rhythm offensively. Today, he was at the four and then we pushed him to the three, and that his where he got some threes. I just don’t want him to worry about other guys on the team making plays because he wants to win so badly.”

On his crucial three-pointer late in the game…
“It was designed for either me or Bo (Spencer) to hit the shot. Coach Johnson said, ?Four up,’ which is me screening for Bo to get him open. If they double-team him, he did what the play was called to do, which is get it back to me. I saw Zach (Kinsley) open for a second, but then, he passed it back to me. I just had to let the shot go.”

On Nicholls State’s style of play…
“Regardless of how a team comes out, we just have to come out ready to play no matter who it is and just step up and be prepared.”

On his mind-set for his critical free throws down the stretch…
“Step up. It’s the end of the game. In that kind of situation, the only thing you have to do is step up. You just need to clear your mind and step up. That’s what you practice for ? those opportunities and those games to be able to knock it down.”

On the team playing sloppy in the first half…
“We were forcing a lot of things, and I think we came out taking this game too lightly. We had some unforced turnovers.”

On LSU and his team’s progress at this point in the season …
“I think these guys are better than the guys we’re going to see night-in and night-out (in the Southland conference). There is no Tasmin Mitchell in the Southland conference, although there are certainly some good players, none are on his level. I thought we came out and fought and played as hard as we could play. I’m really not discouraged or disappointed; I’m actually excited about what this means for January, February and March. If we can capture this and continue to put this on the floor every night, we’ll be in good shape. In this game, their guy makes a big shot there at the end, and our guy then goes down and almost makes as equally big of a shot.”

On preparing defensively for LSU …
“We talked for two days at practice about how physical and tough Tasmin (Mitchell) and Storm (Warren) are. Honestly, there were times in practice where I thought looking at what LSU does and where Trent (Johnson) puts his guys, and the advantage he gives his offensive players, I thought there was no way we could guard these guys. They get on that run in the second half, and I knew we had to try something different. They just kept making shot after shot after shot. Fortunately, they missed a few there at the end and gave us an opportunity to scramble back in it. We just came up a little bit short.”