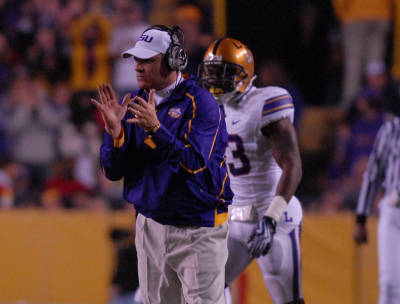 BATON ROUGE ? Day three of LSU’s bowl practice saw an increase in the tempo and contact as the 13th-ranked Tigers continue to get ready for their Jan. 1 contest against Penn State in the Capital One Bowl.

LSU and the ninth-ranked Nittany Lions will square off for just the second time ever when the two teams meet in Orlando on the first day of 2010. Kickoff for the contest is scheduled for noon CST. The game will be televised nationally on ABC.

LSU goes into the game with a 9-3 overall mark, while Penn State is 10-2 overall. A win by the Tigers will give LSU coach Les Miles at least 10 wins for the fourth time in his first five years at the school. Prior to Miles’s arrival in 2005, LSU had only recorded six 10-win seasons in modern day history.

“We had a good practice today,” Miles said. “It was a very physical practice and it got heated, which is just what we needed. The tempo was good and we got some good running in at the end of the practice.

“This was our third day back; we are coming along and making progress. We’re still a ways away from having it in, but we’re making strides.”

Miles said the Tigers will cut back on Thursday, working mainly on special teams. The Tigers will go through full practices on Friday and Saturday before again cutting back on Sunday. LSU will practice on Monday and then have a scrimmage-type of workout on Tuesday before breaking for three days for Christmas.

“I think the tempo of our practices now that we are three workouts in, have been good. You can see the players getting back into the routine. We have gotten better each day. We weren’t perfect by any stretch today, but I like what I’m seeing. There’s been some improvement on both sides of the ball this week.

Miles said another advantage of bowl practice has been the opportunity for some of the younger players to get additional reps.

LSU departs for the Capital One Bowl on Dec. 26 and the Tigers will go through their first practice in Orlando that afternoon.