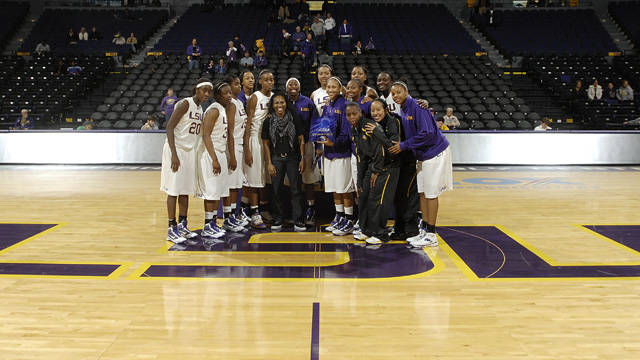 LSU improved to 9-0 for the fourth time this decade and did so with its usual attacking defense, surrendering less than 35 points for the third straight game and the fourth time this season. North Carolina A&T dropped to 4-5 and shot 20.4 percent (10-of-49) for the game.

UL-Lafayette (3-7) won the consolation game earlier in the day by a score of 86-76 over Houston Baptist (2-9). The Ragin’ Cajuns were led in scoring by Alexis Green, who fired in 23 points and was named to the all-tournament team. UL-Lafayette trailed early in the contest but managed to tie the game at the half and outscore the Huskies, 51-41 the rest of the way.

Sophomore forward LaSondra Barrett added 10 points and a game-high seven rebounds for LSU on Wednesday night, and the Lady Tigers spread the wealth for the second straight night as every player who dressed played at least 10 minutes and scored.  Barrett and teammate Taylor Turnbow were named to the all-tournament team.

“I thought this was a great win for us tonight,” LSU head coach Van Chancellor said. “To win the first-ever Sue Gunter Classic is great. To win the game like we did was super. Any time you win by 42 points and play everybody 10 minutes, it’s pretty good. This was a good night for us.”

LSU wasted little time in separating the score with one of the most dominating half’s in school history. The Aggies scored 10 points in the first 20 minutes and shot a dismal 12 percent from the floor, making only three of their 25 shot attempts.

With the score 10-4 in favor of LSU at the 15:21 mark, North Carolina A&T would go on a scoreless dry spell for the next nine minutes. The Lady Tigers meanwhile put together a decisive 20-0 run during the span. Hightower drained a 3-pointer to make it 20-4, and Barrett scored five straight points to increase the lead to 30-4 before the Aggies would impact the scoreboard again.

Nakia Deblanc’s free throw and a Jalessa Sams jumper would end the scoring drought with 5:15 remaining in the first half. By then the game was well in hand for LSU who remained unbeaten. North Carolina A&T threatened to score the fewest points allowed by the Lady Tigers in a half before Ta’Wuana Cook made a baseline jumper as the first-half horn sounded.

The Aggies trailed 38-10 at the break and LSU used a 16-2 run in a seven-minute span to push the lead to 56-19 following Jasmine Nelson‘s jumper at the 10:38 mark. Chancellor worked several combinations in the second half as both true freshmen Adrienne Webb and Bianca Lutley scored nine points. Lutley knocked down a pair of 3-pointers in 13 minutes of action.

“I think our team’s athleticism was a real advantage tonight,” Chancellor said. We have a lot of players who are long and lean, and they play hard. We just substitute a lot of players. We bring in Courtney Jones who’s a really nice player. We bring in (Jasmine) Nelson and (Swayze) Black who are both really good. Our depth is really good right now. I thought (Adrienne) Webb played great tonight.”

LSU finished the game at 47.5 percent from the floor while converting 29 points off of 23 Aggie turnovers. Cook led North Carolina A&T with seven points and a spot on the all-tournament team.

The Lady Tigers face their toughest test to date at 1 p.m. CST Sunday when the Lady Tigers take on No. 18 Nebraska in Lincoln. The Huskers are off to their best start in school history with a 10-0 record.

Opening statement…
“I thought this was a great win for us tonight. To win the first-ever Sue Gunter Classic is great. To win the game like we did was super. Any time you win by 42 points and play everybody 12 minutes, it’s pretty good. This was a good night for us.”

On overall team athleticism…
“I think our team’s athleticism was a real advantage tonight. We have a lot of players who are long and lean, and they play hard. We just substitute a lot of players. We bring in Courtney Jones who’s a really nice player. We bring in (Jasmine) Nelson and (Swayze) Black who are both really good. Our depth is really good right now. I thought (Adrienne) Webb played great tonight. Destani Hughes was outstanding defensively. I wish we could get her to clean up a few turnovers, but her defense was really outstanding.”

On their defensive intensity tonight…
“We just wanted to defend them the way we’ve defended past teams we’ve played. We’ve been working really hard on our defense and we didn’t want to let up tonight.”

On being named MVP of the Sue Gunter Classic…
“It feels good. It feels good to get it, but I don’t really look at individual stats. I’m just glad we got the win.”

On defending North Carolina A&T guard Ta’Wuana Cook…
“The coaches told us she was a very good player and a very good athlete. We just wanted to continue to have good defense like we’ve been doing the past couple of days. Everybody who was guarding her, it was a team effort. I think we did a pretty good job.”

On having each player score tonight…
“It shows it was a team effort. The coaches have been expecting a lot out of the bench when they’re put in to keep up our intensity, energy and the level of play. A couple people stepped up, and it just shows how balanced our team can be that everybody scored.”

On her effort tonight…
“Defensively, I was just trying to keep up what we’ve been doing for the past two games. I just knew my offense would come. Our defense creates our offense, so we knew that. Coming in, I just wanted to dominate the glass on this team and push the ball, so that was my main focus.”

Opening Statement …
“LSU is a really good team, and I have so much respect for Coach Chancellor. He has a really good program and I wish him the best of luck. That team can go as far as they want.”

On the way they matched up with LSU …
“LSU played really good man-to-man defense tonight, and we just couldn’t get anything going against that. I felt like we matched up well with him, height-wise, but they hit some good shots. Granted, we gave them some open looks, but they have some good shooters, and they knocked them down. We know what we have to do, but this wasn’t our team tonight. We’re not going to forget this game, but we’re going to work on it and learn from it.”

On participating in the Sue Gunter Classic …
“First of all I’m just happy to have been able to participate in this tournament. I respect Coach Gunter so much, and I was just happy that we were invited to come down. I was happy to get down here and allow my players to have the opportunity to experience this and play in a big arena against a nationally-ranked team. I know we’re going to learn from this and grow from this, and that’s what you want to do.”