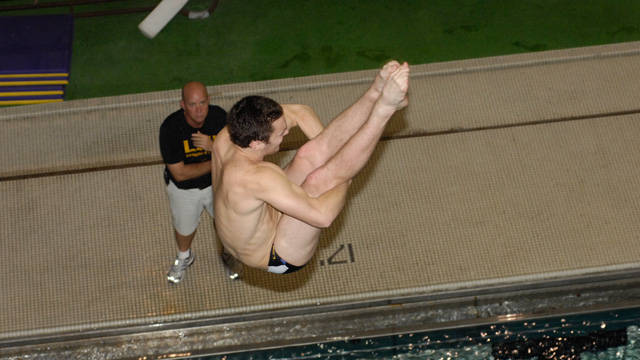 BATON ROUGE — LSU diving will jump back into action with the University of Alabama’s Christmas Diving Classic, beginning Thursday at 10:45 a.m. (CST) in the Alabama Aquatic Center.

The Tiger divers will go up against athletes from host Alabama, Auburn and Georgia Tech.

“Coming off of finals, this invitational is set up as an opportunity to get good competitive experience against divers from Auburn, Alabama and Georgia Tech as we round out 2009,” LSU diving coach Doug Shaffer said. “Following this competition, we’ll come right back from the holidays for another invite at Georgia, which will set us up for the second half of our season and our preparation for the SEC Championships.”

Gemberling has enjoyed a terrific first half to his sophomore season, posting career highs and school all-time top-10 scores in all three events. The Levittown, Pa., native currently ranks sixth in the Southeastern Conference in the three-meter (367.95), eighth in the platform (259.05) and ninth in the one-meter (333.30).

St. Germain emerged as one of the top freshman divers in the conference in the early part of the season, earning both SEC Female Diver and SEC Female Freshman of the Week honors for her efforts in October. The San Antonio, Texas, product is fourth in the conference in the one-meter (310.95). Schmidt has been a solid performer in her first collegiate season with top scores of 265.50 and 292.20 in the one- and three-meter, respectively.