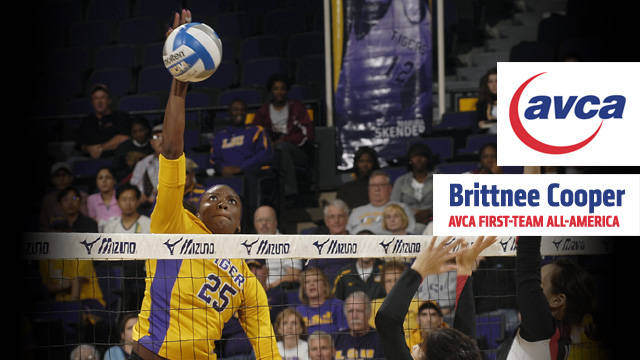 “This is such a wonderful honor for Brittnee,” head coach Fran Flory said. “As I reflect on how far she has come during her career, it’s such a fitting finish to have her recognized on the AVCA All-American First Team. She has gone from being a great athlete to being a great volleyball player this season. We’re so proud that she has been recognized on the national level for her hard work and dedication.”

Cooper connected for a team-high 410 kills on an astonishing .409 hitting percentage, which is a program single-season record in addition to ranking No. 6 nationally. She knocked double-digit kills on 23 times highlighted by a career-best 28 spikes against Texas A&M in the NCAA Tournament Second Round.

Cooper anchored LSU’s front row defense as the Tigers recorded 2.75 blocks per set en route to a No. 12 national ranking. Cooper’s 1.37 blocks per frame not only headlined the SEC but was No. 18 nationally. She tallied at least five blocks on 15 occasions and finished fifth on the program’s all-time list with 495 total stuffs.

LSU put together an impressive 25-7 record in 2009 en route to the program’s first SEC regular season title since 1991. Under Flory, the defending five-time SEC Western Division champions are one of only 20 programs in the nation to appear in the last five NCAA Tournaments.