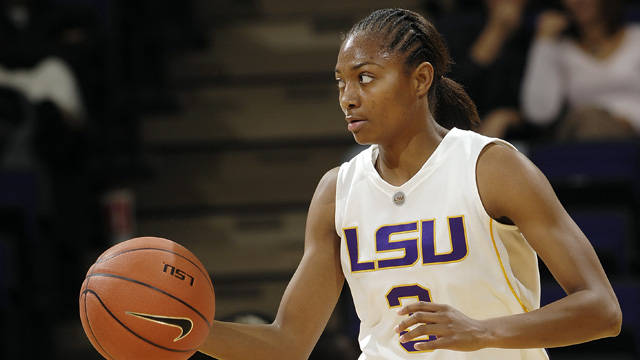 BATON ROUGE — The fifth-ranked LSU women’s basketball team came out with a 16-0 run to the start the game and never looked back as the Lady Tigers dominated Houston Baptist, 93-31, in the second game of the inaugural Sue Gunter Classic on Tuesday night at the Pete Maravich Assembly Center.

The championship game will be streamed live online in the Geaux Zone on www.LSUsports.net. The contest will also be carried live on the LSU Sports Radio Network on 107.3 FM in Baton Rouge.

LSU’s 62-point margin of victory tied for the seventh largest in school history. It was also the third time this season the Lady Tigers have surrendered 35 points or less to an opponent. LSU has allowed a combined 63 points in its two previous games.

“This is a complete win by the Lady Tigers,” said LSU head coach Van Chancellor, who now sits three wins shy of 500 career victories. “Eight turnovers. Twenty-one offensive rebounds. We shot 53 percent. We played well on both ends by all 12 players. We should have won by that margin, and we did win by that margin. When you do what you’re supposed to then that’s good.”

Tuesday’s game allowed Chancellor to spread playing time as every Lady Tiger who dressed played at least 13 minutes. LSU starters rested for most of the game, including the reigning Southeastern Conference Co-Player of the Week Allison Hightower. Hightower played 16 minutes and scored 10 points with three assists and two steals.

LSU had five players score in double-figures, a first since the Lady Tigers did so at Tennessee on Feb. 14, 2008. Sophomore forward Taylor Turnbow and junior point guard Latear Eason led the way with 12 points apiece. Sophomore guard Erica Williams scored her first career points and finished with 11 and sophomore Courtney Jones chipped in 10 points.

“I thought Latear Eason was outstanding tonight,” Chancellor said. “When you play point guard for us and have 12 points and only missed one shot that’s great. You get all your free throws, three rebounds, five assists and no turnovers. I thought she played outstanding tonight.”

LSU, who struggled offensively against New Orleans, found its rhythm against HBU shooting 53.4 percent (39-of-73) for the game and dominating points in the paint, 52-12. The Lady Tigers amassed a 16-0 run in the game’s first six minutes. The lead quickly grew to 30 points after Adrienne Webb buried the first of her two 3-pointers at the 3:13 mark in the first half.

LSU took a commanding 46-15 advantage into the locker room and continued its offensive assault with a 24-2 run in the first nine minutes of the second half. Webb added another 3-pointer and Williams had her first bucket as a Lady Tiger with consecutive layups that put LSU ahead 70-17 with 10:24 remaining in the game.

Jasmine Nelson and Swayze Black saw significant minutes in the game’s final 10 minutes. Both registered game-highs in rebounds with eight. Nelson had five points in a span of two minutes and Black’s layup at the 4:10 mark made it an 85-27 contest.

Houston Baptist finished the game at 26.5 percent (13-of-49) from the floor while committing 28 turnovers. The Huskies allowed 23 second-chance points and were led in scoring by Raquel Jones, who finished with eight points.

Four North Carolina A&T players scored in double-figures, including a game-high 25 points from Ta’Wuana Cook, as the Aggies defeated Louisiana-Lafayette, 95-78, in Game 1 of the Sue Gunter Classic at the Pete Maravich Assembly Center.

UNC A&T took a 49-36 advantage into the locker room and maintained that advantage, outscoring the Ragin’ Cajuns 46-42 in the second half. UL-Lafayette (2-7) was led by Alexis Green, who finished with 24 points.

Opening statement…
“This is a complete win by the Lady Tigers. Eight turnovers. Twenty-one offensive rebounds. We shot 53 percent. We played well on both ends by all 12 players. We should have won by that margin, and we did win by that margin. When you do what you’re supposed to then that’s good.”

On if there was any talk of trying to score 100 points…
“Yes, there was. At the end of the game, we were trying to get the people on the floor to get to 100 points. What was it, 93 [points]? That was good enough. We thought our bench came in and gave us great minutes tonight. Overall, we just came in and wanted to dominate our opponent. I think we did that on both ends of the floor tonight.”

On improving upon a poor shooting effort against UNO…
“You have games where your shot isn’t falling, and we came back to practice and worked on it and got a lot of shots in. I just think we did well preparing for this game.”

On what they can take away from such a dominating effort…
“I think the main point of this game, or games like this, is to work on your defense. It’s not about your opponent, it’s about how you play and being consistent. We played a great game the other night ? the last time we played ? and just putting two games together and playing well is what we’re working for.”

On playing against LSU on the road …
“I tried to preach to our players all week that we’ve been here before to a certain extent because we opened with preseason-ranked Duke. The difference was we played Duke at our place and obviously coming in and playing No. 5 LSU is a totally different ball game. With my coaching and playing experience, I tried to give them the best visual I could possibly give them, but until you play a game in an environment like this you can’t really know what to expect until you have an experience like this.”

On his relationship with former LSU head coach Sue Gunter …
“She was a very graceful, classy lady. I’m not sure I can make a statement about another coach that has meant more to women’s college basketball than Sue Gunter. She was a kind soul, and she made everybody feel just as important as we all knew that she was. She’s a legend.”

On LSU…
“It was the most athletic, quick, lengthy teams we’ve faced. Everyone on that team is an athlete, and that’s the thing we tried to simulate in our practices. Sometimes we’d play 6-on-5 and worked on our transition defense a lot. I was really pleased with our transition defense considering the type of athletes and the type of team we played against. We just couldn’t make a shot. I feel like we executed as well as we have all season in the half-court offense. We just couldn’t make a shot. Therefore, we couldn’t set up any kind of containment press.”