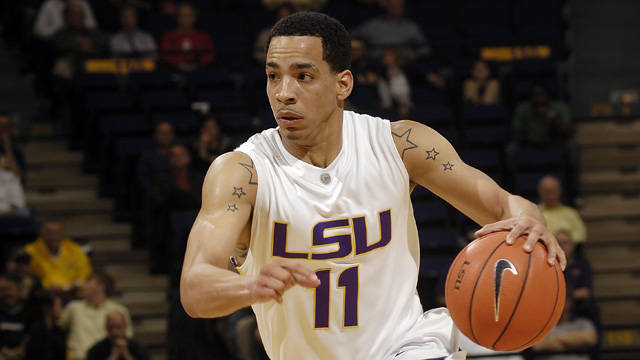 Mitchell connected for 24 points on 9-for-18 shooting en route to his third consecutive 20-plus scoring performance. He also hauled in a career-best 18 rebounds. LSU (6-2) shot 47.3 percent from the floor and improved to 26-2 when scoring over 70 points during the Trent Johnson era.

Mitchell’s three consecutive 20-plus games is the first time an LSU player has done that since February of last season when Marcus Thornton was three-straight against Ole Miss, Arkansas and Auburn.

Mitchell also made strides in the all-time career scoring list at LSU, moving up two spots as he cracked the top 10 in career scoring now with 1,603 points, moving into ninth place all-time. There is a bit of a gap of just over 120 points to get to the eighth spot but Mitchell is on pace to get into the top five all-time in scoring with over 1,900 points.

Spencer chipped in 21 points and handed out a game-high five assists, while Warren turned in his third straight double-double with 14 points and 12 rebounds.  It marked the second time in eight games this season that Warren has had three consecutive double doubles and the league leader in rebound average at 11.4 a game did nothing to hurt that Monday night.

For Mitchell it was his 18th career double double, second of the year and for Warren he now has six this season and seven for his two years at LSU.

LSU extended its home winning streak to 78 games against in-state schools dating back to December 1988 largely in-part to a 23-5 run during a 12-minute span that started during the final four minutes of the first half.

Trailing 29-26 with 3:55 left, the Tigers held Southeastern Louisiana (6-2) without a field goal for the rest of the stanza. A Mitchell jumper with 16 seconds left gave LSU a 34-31 edge going into the locker room.

LSU didn’t look back and exploded for 15 of the first 18 points to start the second half capped by a pair of Mitchell free throws to push its lead to 49-34 at the 13:35 mark.

The Lions would get back to 51-41 three minutes later before LSU reeled off a 17-8 spurt to return the lead to a healthy 68-49 margin capped by a Warren reserve jam with 4:06 remaining.

Patrick Sullivan paced the Lions with 19 points and 13 rebounds.  Southeastern’s two losses are now on the home floor of SEC teams ? Mississippi State and LSU.

The Tigers for the third straight game had 40 rebounds ? 40 even against the Lions ? out rebounded SLU, 40-33. LSU cut its turnovers in half from its last game Saturday with Northwestern with only nine and scored 20 points off the 11 Southeastern turnovers.
LSU shot 47.3 percent for the game with Mitchell, Spencer and Warren combining to hit 21-of-40 overall and 6-of-11 from the arc.

LSU continues its four-games in eight days home stand Thursday against Nicholls State. Tip-off is slated for 7 p.m., and the game will be televised by Cox Sports Television.

The game also can be heard live on the LSU Sports Radio Network (New Country 100.7 FM The Tiger in Baton Rouge) and online at LSUsports.net in the Geaux Zone. Tickets are available online at LSUsports.net and at the LSU Athletics Ticket Office. LSU closes out the 2009 home portion of its schedule on Saturday at 1 p.m. against Rice.

Opening statement …
“One of the first things I mentioned after the game in the locker room was that was us. That is what we are capable of when we are mentally and physically right. That was a good basketball team we beat. I thought we were really good defensively in the second half. In a very positive way, we challenged Storm (Warren).  (Patrick) Sullivan pretty much had his way in the first half. I thought Storm did a really good job of getting physical and playing smart. We had our veterans play like veterans. It was a good win for us. I thought we beat a good basketball team.”

On his halftime speech …
“The mood in the locker room with this group is always a quiet team. Basically, what we said was that we needed to clean up a few things defensively. Storm needed to take away some angles to the basket for Sullivan and be aggressive. I told Bo he needed to continue to run the team, take his time and be positive with everyone. Contrary to what people might think, I don’t holler and scream at halftime.  When guys are giving maximum effort, halftime is the time to make adjustments and try to help them as opposed to screaming and hollering at them.”

On how Storm improved against Sullivan …
“First of all, Sullivan is good. He went 20 and 12 off of Jarvis at Mississippi State. I thought Storm showed, and I don’t mean this in a negative way, that he showed a little too much respect in terms of being his usual aggressive self. That is to be expected, and quite frankly, I like that as opposed to him being really, really aggressive and getting a loose ball foul or a cheap foul.  This is the first time around for him other than UConn where he got into foul trouble when he played a guy that caliber physically. It is a learning process, but again, as good a player as Sullivan is, there were three or four situations where it was Chris once and Bo where they would cover down and then go back to their guy. It was a good team defensive effort at times.”

On Bo’s ankle …
“He felt better. It is good for us. People are going to struggle, kids are going to struggle and we as coaches are going to struggle. It is just like I tell my guys all the time, ?We are all in this together.’ I’m responsible. Whatever is not going right, no matter if it’s socially, academically or athletically, that is on me. He felt better. He played better. It was nice to see him out there with a smile, having fun and seeing him move like he is capable of moving. I think it was contagious. One of the plays that stick out to me is when the ball was thrown to Tasmin (Mitchell) and they doubled down. Chris Bass was wide open and passed it up. You had Bo and Chris screaming at him to shoot it. It is one thing for me to say it, but when your teammates say don’t worry about it and shoot the ball, Chris shot it and knocked it down. Those guys got excited for one another. There was a period there where we went up 15 or 20 and they came down and hit a three off of a transition. The guys got back and picked themselves up without me having to say something. We are making progress within those regards.”

Opening statement…
“I don’t think we started the game how we wanted to; the game was close, and they had the lead and momentum. We came back at the end of the game and executed and wore them down. We just kept going up the court.”

Opening statement…
“Just like Tasmin (Mitchell) said, we had to come back and play our game and focus.”

On struggling against Southeastern’s Patrick Sullivan early in the game…
“I tilt my head to him for the first half. He came out ready. He had better positioning. I had to adjust and step my game up. He came out to play.”

On whether Patrick Sullivan being left-handed made it difficult to defend…
“Not really. It was all on me. I just have to come out and play. No excuses. I have to be ready. I’m thankful I had my teammates to back me up and held defend him.”

Opening statement…
“We came out and played a good game. We played hard. We eliminated turnovers and came out with a victory.”

On playing more comfortably in tonight’s game against Southeastern…
“I’m just healthier. I played my game. That’s about it.”

On injury improvements since Saturday’s game against Northwestern St. …
“I had that ankle injury. My ankle is still tender. I’ve been rehabbing it. I came out tonight, and it was feeling better.”

On the emotions following tonight’s loss …
“I haven’t been this disappointed all season, and I think it’s just a statement that we’re not ready to claim any sort of position in the Southland Conference just yet. We’re just a good team that’s trying to become better and establish ourselves, but if we can’t get more mentally tough from one half to the next, and if we come out and mess around and blow leads and come out brain-dead and let someone run all over us then we’ve got a long way to go to learn how to be a good basketball team. This was the type of test that we needed to rise up to the occasion and prove we were worthy. We did that in the first half, but did not rise up to the occasion in the second half, and I think this is one of the most disappointing losses for Southeastern in a long time.”