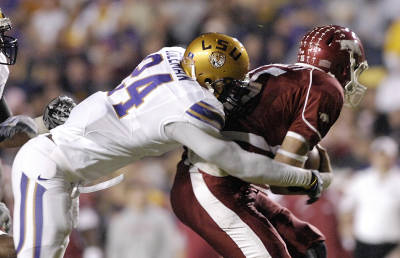 Coleman, a senior from Baldwin, La., was named the recipient of the Charles McClendon Most Valuable Player Award as well as being one of three permanent team captains. Coleman, who started all 12 games for the Tigers after being converted to linebacker from safety, finished the year with 77 tackles, nine tackles for losses and four sacks. He was named the SEC Defensive Player of the Week for his performance in LSU’s 31-10 win over Auburn.

LaFell, a senior wide receiver from Houston, earned the Percy E Roberts Award as the team’s most outstanding offensive player. LaFell, a second-team All-SEC pick, led the Tigers with 52 receptions for 705 yards and 10 touchdowns.

Chad Jones and Patrick Peterson shared the Percy E. Roberts Award as LSU’s outstanding defensive players. Jones, a safety, finished with 66 tackles and a team-best three interceptions for a Tiger defense that ranked third in the SEC in points allowed at 16.0 per game. Peterson, a second-team All-SEC pick at cornerback, recorded 47 tackles and ranked third in the SEC with 15 passes defended.

Joining Coleman as permanent team captains for the Tigers were Ciron Black on offense and Josh Jasper on special teams. Jasper, who converted 16 of 19 field goals this year, also shared the Special Teams Player of the Year honor with return specialist Trindon Holliday. Holliday led the SEC and ranked No. 2 in the nation in punt returns with a 17.7 average.

Lyle Hitt, who is scheduled to graduate later this week with a degree in kinesiology, was named the Coates Scholar-Athlete Award as the top student-athlete on the football team.

The Alvin Roy Strength and Conditioning Award was presented to defensive tackle Al Woods and linebacker Jacob Cutrera, while Kelvin Sheppard and Drake Nevis were named the recipients of the George M. Wallace Award for defensive performance. Sheppard led the Tigers with 103 tackles, while Nevis was tops among all defensive linemen on the team with 48 tackles, including 10 tackles for losses.