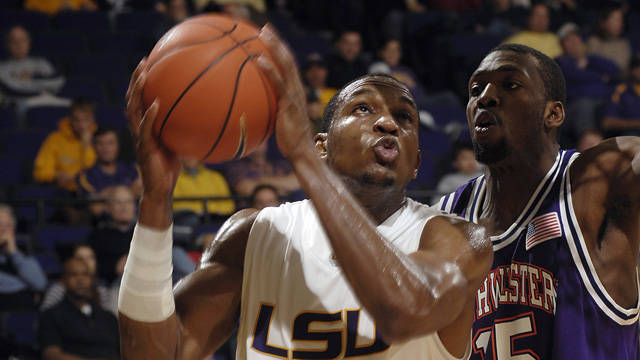 The win was the Tigers 77th straight against Louisiana schools in the Maravich Center dating back to the start of the streak on Dec. 8, 1988. LSU is now 5-2 on the season while Northwestern State is 4-4.

Northwestern State was able to take advantage of some cold shooting in the first 15 minutes of the game by LSU and led by as much 13 points with 4:01 to go in the opening half before LSU cut the margin to six, 35-29, at the intermission.

Senior Mitchell for the third straight game was hitting good from the field and the line, hitting 6-of-12 field goals, including a trey, and 11-of-14 free throws to finish with 24 points. Warren hit 9-of-11 field goals in the contest and did nothing to hurt his Southeastern Conference lead in rebound average and offensive rebound average as he grabbed nine offensive boards, 16 total to go with 21 points for his fifth double double in seven games this year.

LSU went with a different lineup again as Dennis Harris did not dress, suffering from herniated disc problems that flared back up this week. Freshman Eddie Ludwig started his first collegiate game and had five points and five boards in 16 minutes.

Devon Baker led Northwestern State with 18 points, while Jones had 14 and Dominic Knight 10.

The Tigers will have one day of practice and then must play Southeastern Louisiana on Monday night at 7 p.m. in the Maravich Center putting the win streak back on the line once again. There is no television for the game and tickets are available at LSUsports.net. Southeastern ran its record to 6-1 with a 77-55 win over Jackson State in Hammond on Saturday. The Lions are off to their best seven-game start since 1982-83.

The Northwestern State game was the first of four in eight days at home for LSU as LSU will also host Nicholls State on Thursday night at 7 p.m. and Rice on Saturday at 1 p.m.

Opening statement …
“Obviously, I thought we played hard from start to finish. I don’t want to take anything away from Northwestern State. I have a lot of respect for Coach McConathy, and I thought they caused us a lot of problems–more than we caused ourselves. We looked a little out of sync. The thing that concerned me, and I told them after the UL-Lafayette game, was when the ball didn’t go down for them, there was a sense of panic as group. We can’t let a bad play or missed shot, affect the way we get back and defend.

“To start the second half, Northwestern State was six for seven on their first seven offensive possessions. After that, I thought we defended, and from an individual standpoint, Tasmin (Mitchell) was good. I thought Storm (Warren) was Storm. Obviously, Eddie (Ludwig) gave us a good lift coming off the bench in certain situations. We have a much different basketball team and a better basketball team in terms of their athletic ability, skill level and confidence.

“We are looking at Southeastern Louisiana coming in here on Monday. We are looking at them on tape from last year. They will cause as many problems for us as anyone in terms of their transition. We are going to have to sprint back because of the way their fours and fives run. When you look at them, their speed and athletic ability, I don’t want to say it’s like UConn, but it’s similar in terms of how they like to run. The good news is that we have a game under our belt. We’ll practice tomorrow at 5 p.m., and come back at it again on Monday.”

On how the team was able to bounce back offensively …
“I thought there was a conscious effort to execute. I thought we pushed Tasmin down which allowed Zach, Bo and Chris to play together out front.  Storm rotated in and out with Eddie. When you start looking at us offensively, I think that is the best combination in terms of a good rhythm because you can run offense through Tasmin. He is a three, can step out on the perimeter and make passes. Right now, Garrett (Green) played well.  He played as well as he’s played all year, but he isn’t there yet. Aaron (Dotson) is still trying to find his way. When you look at our group, that group is our best group in terms of being able to pass, catch and get good ball movement.”

On LSU taking the lead …
“I think what you have to look at is the three or four situations where the ball was on the floor, and we were the first one to it. It might have been Storm one time. It might have been Tasmin one time. I was sort of shocked that Aaron was down there. Those are the things that we have to get to.”

Opening Statement  …
“My hats off to Northwestern. They played a hard, tough game. We had a drought of ten days where we didn’t play a game. We didn’t come out with a sense of urgency, and we had to play harder at the end.”

On if the ten day break affected the team …
“I think so. They played a hard fought game and they are a well coached team. We came out and were trying to do things that we know we don’t do. We had a long break and a whole bunch of finals, so we are trying to get our minds right and just worry about basketball. Now that finals are done we can just focus on the next game.”

On getting the ball often down the stretch …
“That is thanks to my teammates and my coaches for believing in me. I wanted to go out there and get the ball and make something happen. I just tried to capitalize on the opportunities.”

Opening Statement …
“I don’t think we came out with a sense of urgency. They are a good team. Every team is going to come out and come at us with their best game, especially all the teams from Louisiana. But we were able to pull it off at the end.”

On the high amount of turnovers he had …
“I was just getting lackadaisical. I just need to stay strong, stay low, and get people the balls in the right spots and we will be all right.”

On what he worked on to be able to dominate with rebounds and stay out of foul trouble …
“Position. Just try my best to be in position, stay alert and be ready. I need to be more selective in the choices that I make. I just try and stay relaxed, stay calm, and just stay selective and wait for my opportunities.”