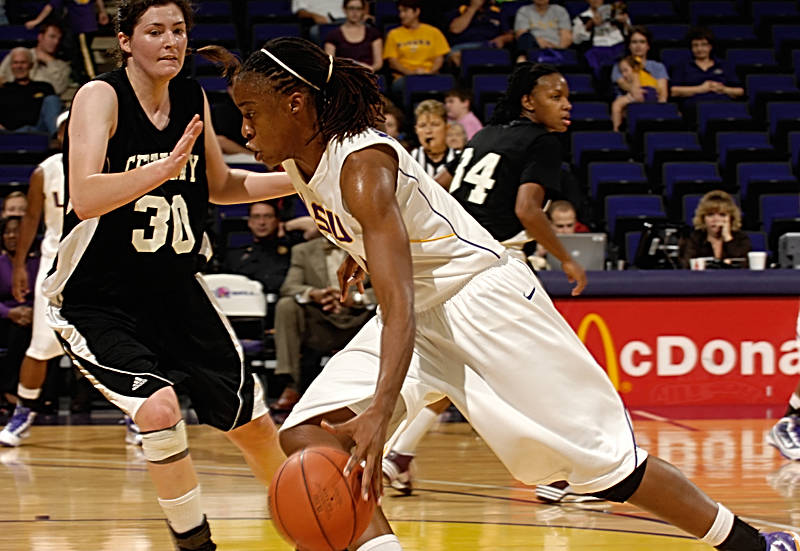 BATON ROUGE — After an 11-day layoff for final exams, the fifth-ranked LSU women’s basketball team returns to the court and seeks to remain unbeaten as New Orleans visits the Pete Maravich Assembly Center for an in-state matchup at 2 p.m. CST Sunday.

The game will be televised live by CST. Lyn Rollins and Victor Howell handle the call. The contest will also be carried on the LSU Sports Radio Network on 107.3 FM in Baton Rouge. Live streaming audio and video is also available to members of the Geaux Zone on www.LSUsports.net.

The first 1,500 fans in attendance on Sunday get set two of the 2009-10 LSU women’s basketball team trading cards. Should the Lady Tigers score more than 50 points, fans can get a free regular sized coffee as part of the PJ’s Coffee Challenge. Halftime entertainment will feature a dance performance by the second graders of the University Laboratory School.

Allison Hightower, Jasmine Nelson and Adrienne Webb will sign postgame autographs on the upper concourse of the Maravich Center.

LSU (6-0) is playing its first game since holding on for a 77-74 win at Louisiana Tech on Dec. 1. The Lady Tigers are off to their best start since 2005 and moved into the top five of the latest Associated Press poll earlier this week for the first time since November 2007.

LSU is one of four teams undefeated in the Southeastern Conference, joining Tennessee, Georgia and Kentucky. LSU head coach Van Chancellor is just five wins shy of reaching 500 career collegiate victories. The Hall of Famer is 455-171 in 22 seasons at the collegiate level and the Lady Tigers are off to their best start in the Chancellor era.

“This is just another in-state challenge and we expect UNO’s best shot,” Chancellor said. “Every team in this state gets up to play LSU and we have to be ready. Anytime you have an 11-day layoff it can bother you, but we have always managed that here at LSU this time of year. We have always played with this break.”

Hightower is coming off a career-high 32-point performance against the Lady Techsters. The preseason All-American is averaging 18.0 points per contest, which ranks fourth in the SEC. She paces an LSU offense that posts 76.8 points per game and is tops in the league in scoring margin at +26.7.

Hightower is one of three Lady Tigers who average double figures. Sophomore forward LaSondra Barrett is second on the team with 11.5 points and sophomore forward Taylor Turnbow is scoring 10.0 points and grabbing a team-best 6.3 rebounds per contest.

Despite surrendering 74 and 65 points, respectively, in its last two games, LSU remains the SEC’s No. 1 scoring defense for the sixth straight season. The Lady Tigers are allowing only 50.2 points per game while holding opponents to 36.0 percent from the floor.

LSU has won the last five meetings between the two, and the Lady Tigers lead the all-time series, 20-5. LSU defeated the Lady Privateers, 67-48, in New Orleans last season behind 21 points from LaSondra Barrett. UNO has not beaten LSU since March 1, 1993.