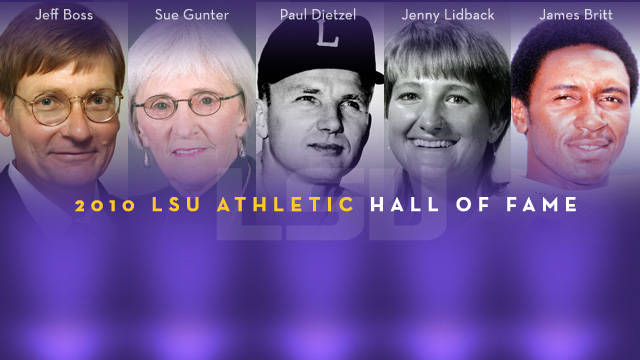 BATON ROUGE ? Two former LSU standouts and three former LSU coaches and administrators have been elected to the LSU Athletic Hall of Fame, the school has announced.

The five newly elected honorees will be formally inducted into the LSU Athletic Hall of Fame next year on a date to be announced.  Boss and Gunter will be inducted posthumously.

James Britt played football at LSU from 1978-82, starring at cornerback for the Tigers under head coaches Charles McClendon and Jerry Stovall.  His best season was his senior campaign when he was named first-team All-American by the National Editorial Alliance as well as first-team All-Southeastern Conference while leading the Tigers to an 8-4 record and an appearance in the Orange Bowl.

An outstanding student in the classroom, Britt was an Academic All-American his senior season, one of 20 football Academic All-Americans in LSU history.  In his final two years at LSU, he recorded 119 tackles and pulled in six interceptions.  He was a second round draft choice of the Atlanta Falcons in the 1983 NFL draft and played for the Falcons from 1983-87.  A 1982 graduate of LSU, Britt now resides in Shreveport.

Jenny Lidback played golf at LSU in 1986 after transferring from TCU.  Her 1986 season with the Tigers is the single greatest season in the history of golf at LSU as she was named All-American, SEC Player of the year and National Collegiate Player of the Year.  During that remarkable season she won seven individual tournament titles, more in one season than any other LSU golfer has won in a career.

A two-time All-American at TCU before transferring to LSU, she was the 1985 Individual Women’s World Amateur Champion while playing for Peru in 1985.  A 1986 graduate of LSU, she had a successful career on the LPGA Tour from 1989-2003 and has competed on the LPGA Senior Tour since 2008.

Jeff Boss served as equipment manager for the LSU Athletic Department for 24 years from 1980 to 2003, establishing himself as one of the premier individuals in his profession.  He received the Glenn Sharp Award in 1990, given annually to the national Equipment Manager of the Year and he was the designer of the “Boss Shark” football shoe for the Nike Shoe Company.

Boss tutored 14 student managers who went on to become full-time equipment managers and he was known for mentoring numerous student-athletes in addition to his responsibilities as an equipment manager.  His life was devoted to providing a more gratifying college experience for students and he often said his greatest pleasure came from “watching kids grow up.”  Boss graduated from McNeese State in 1971 and earned a master’s degree there in 1972.  He died in 2003 and the Tiger football team dedicated their national championship season to him that year.

Paul Dietzel served as head football coach at LSU from 1955-61 and invigorated Tiger football, leading LSU to its first national title in 1958 and winning National Coach of the Year honors in the process. As adept at promoting Tiger football as coaching it, attendance at LSU football games exploded during his tenure.  During a seven-year stint as head coach, the Tigers registered a record of 46-24-3, won two SEC titles (1958 and 1961) and finished in the top five in the nation three times (1958, 1959, 1961).

Dietzel continued his coaching career at Army and South Carolina after leaving LSU following the 1961 season, and began a career in athletic administration when he also held the position of athletic director at South Carolina.  Dietzel was commissioner of the Ohio Valley Conference for one year before joining Indiana University as AD in 1976.  He returned to LSU as director of athletics in 1978, a position he held until 1981.  A 1948 graduate of Miami of Ohio, Dietzel was inducted into the Louisiana Sports Hall of Fame in 1988.

Sue Gunter was the head coach of the LSU women’s basketball team from 1982-2004 and became the winningest coach in Lady Tiger history with 442 victories.  She led LSU to the 2004 Final Four, setting into motion a string of five straight Final Four appearances for the Lady Tigers.  Also during her tenure as LSU head coach, the Lady Tigers won SEC Tournament titles in 1991 and 2003, captured the 1985 Women’s NIT title and appeared in the NCAA’s Elite Eight three times.  She was the SEC Coach of the Year in 1997 and 1999 and the National Coach of the Year in 1983.

Gunter coached at Middle Tennessee State for two years and Stephen F. Austin for 16 seasons and then served two years as athletic director at SFA before joining LSU in 1982.  A legend in women’s basketball circles, she is the third winningest coach in NCAA history with 708 wins.  She is a member of the Naismith Basketball Hall of Fame, the Women’s Basketball Hall of Fame and the Louisiana Sports Hall of Fame. A 1962 graduate of Peabody College, Gunter died in 2005 at the age of 66.