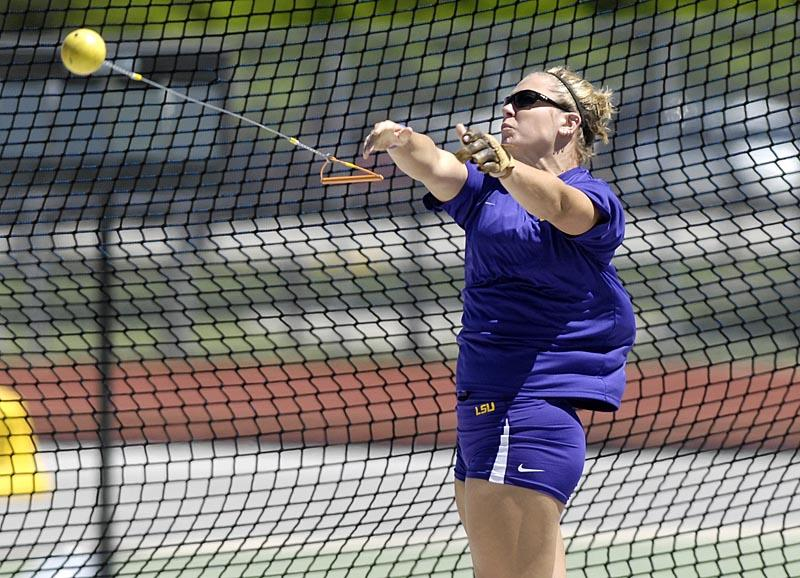 The LSU track and field teams are gearing up for another banner year this spring and are in the midst of a strenuous fall training regimen designed to help them compete against the nation’s best. The Tigers and Lady Tigers form the premier combined program in all of collegiate track and field with an impressive 31 NCAA championships and 46 Southeastern Conference championships all-time.

Eighth in a nine-part series updating LSU’s progress during the fall training season will focus on the throws group.

BATON ROUGE — With the start of the 2010 indoor season just over a month away, LSU’s track and field athletes have entered a more event-specific phase of training as they continue their preparation, and that is certainly the case with the Tiger and Lady Tiger throwers led by assistant coach Derek Yush.

The training regimen for the LSU throwers involves more technique work as they prepare themselves for competition. This is a progression from the first phase of the fall season in which the group was involved with more strength-building exercises and explosive movements.

Yush said that the dedication shown by his athletes in the strength-building phase of fall training has built a solid foundation for maximum performance in each throwing event.

He also stressed that while his athletes are now focused on more technique-oriented workouts with greater intensity and volume in their respective throwing events, they continue to engage in such strength-building exercises as stadium jumps using dumbbells, hurdle hops and plyometrics in addition to the time spent in the weight room to maintain a solid base for training.

“I’ve got them exactly where I want them,” Yush said. “In my years of coaching, this is the group of men and women who are most prepared to compete and be successful. I could not have asked for more through the fall season with the start of the season just a few weeks away. They are performing above and beyond any group I’ve ever had before. The season can’t get here soon enough.

“We’re now in a phase of training in which we focus more on the technique in each event, although we’ve really worked on strength training and technique throughout the fall season.”

Yush also said that his athletes have had an advantage while training in the warm climate commonly seen in Baton Rouge during the fall and winter months.

LSU’s throwers have thrown event-specific implements outdoors throughout the year at the Bernie Moore Track Stadium. That is sure to continue through the months of December and January as the Tigers and Lady Tigers prepare for the 2010 season opener at the Purple Tiger Classic on Jan. 22.