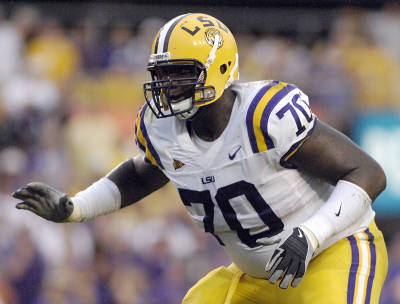 BIRMINGHAM, Ala. — For the first time since 1997, a member of the LSU football team has been recognized as the Southeastern Conference’s most outstanding blocker as senior tackle Ciron Black was named the recipient of the 2009 SEC Jacobs Blocking Trophy, the league office announced on Wednesday.

Black, a native of Tyler, Texas, becomes the fifth Tiger in school history to claim the award and the first since All-American Alan Faneca did so in 1997. The award has been presented annually to the league’s top blocker since 1935.

“It’s an honor to have claimed this award,” Black said. “I thank God and all the people who have made it possible for me to play at LSU. We have done some great things here in my career, and I couldn’t have done it anywhere else. It’s just a blessing to have been part of this.”

Black, one of the top linemen in school history, earned first-team All-SEC honors this season from the Associated Press and league’s coaches. He was a second-team All-SEC selection as a junior in 2008.

Black has started 52 consecutive games at left tackle for LSU, tying a school record for consecutive starts set by Andrew Whitworth. He can become the school’s all-time leader in consecutive starts when the Tigers take on Penn State in the 2010 Capital One Bowl on New Year’s Day in Orlando, Fla.

“Before the season, I never thought about the streak,” Black said. “I’ve been fortunate to stay injury free. I thank our training staff. I would love to break the streak, but at the same time it’s bittersweet because it means I’ve got one game left as a Tiger. I’ve got to leave my home away from home after this. I remember my first start and now it has flown by. It is a blessing to have made it this far. I thank all of my coaches, staff and teammates who have made me who I am at LSU.”

Black led LSU with over 70 knockdowns this season while grading out over 85 percent in all 12 of LSU’s games. He posted a team-best 68 knockdowns in 2008 and has started every game of his career since his redshirt freshman season of 2006.