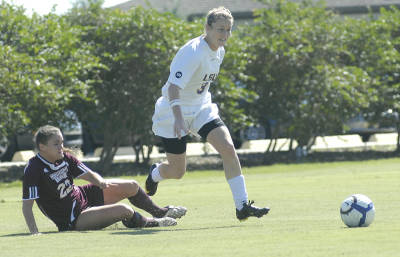 BATON ROUGE — After earning First-Team All-South Region honors from the National Soccer Coaches Association of America this past weekend, LSU senior Malorie Rutledge received a NSCAA Third-Team All-America selection as announced by the organization on Wednesday.

This marks the second year in a row that Rutledge has been honored as a Third-Team All-American from the NSCAA as she is the only LSU Tiger in history to receive NSCAA All-America recognition.

A native of Sharpsburg, Ga., Rutledge will go down in history as the most decorated player to ever wear a LSU uniform as she also picked up her second-straight SEC Offensive Player of the Year honor and third-straight First-Team All-SEC selection following the 2009 regular season.

In addition, Rutledge was also a first-team member of the 2009 TopDrawerSoccer.com Women’s College Team of the Season released on Nov. 12.

Rutledge has been a catalyst in LSU’s rise to national prominence during her brilliant four-year collegiate career. She has helped lead the Tigers to three-straight SEC Western Division championships and at-large berths into the NCAA Tournament in each of the last three seasons. That includes back-to-back runner-up finishes in the final SEC regular season standings in the chase for the conference championship.

She proved to be one of the more dominant offensive threats in all of women’s college soccer this year as she finished the season with a career high 13 goals and 12 assists for a career high 38 points. That effort is what led the Tigers to a 15-4-5 overall record and a school record 8-2-1 mark in SEC play in 2009.

Rutledge wrapped up her four-year career as LSU’s all-time leading assist maker and point scorer with an impressive total of 28 goals, 46 assists and 102 points as one of the premier talents in the college game.