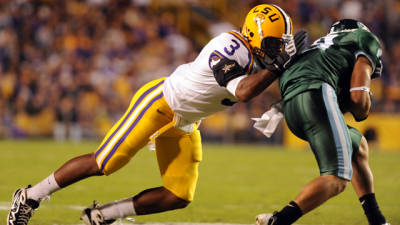 BIRMINGHAM, Ala. — LSU senior offensive tackle Ciron Black earned first-team All-Southeastern Conference honors from the league’s coaches, and three other Tigers were named to the Coaches All-SEC Second Team, as the league office announced its postseason awards on Tuesday.

Black, who was named to the Associated Press All-SEC first team on Monday, has started 52 straight games at left tackle, which has tied the school record of consecutive starts set by Andrew Whitworth. With one more start in the Capital One Bowl, Black will become the school’s record holder in that category. Black was a second-team All-SEC selection last season.

LaFell, a native of Houston, has caught 52 passes for 705 yards and 10 touchdowns. His 10 touchdown receptions are tied for fourth in the LSU single-season record books. For his career, LaFell has hauled in 170 passes, which is third in school history, while his 24 career touchdown catches is just two shy of tying the LSU record of 26 set by Dwayne Bowe.

Peterson, one of the nation’s elite cornerbacks, ranked third in the SEC in passes defended with 14. The sophomore registered 47 tackles and two interceptions while returning a blocked field goal 53 yards for a touchdown at Ole Miss.

Jones tallied 66 tackles, including 1.5 tackles for loss. He racked up three interceptions, five pass breakups and returned a punt 93 yards for a touchdown at Mississippi State.