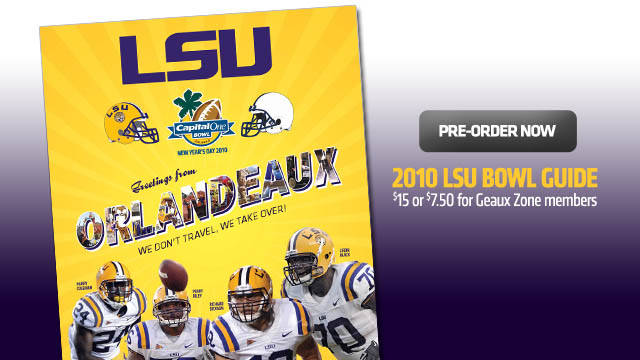 BATON ROUGE — LSU’s 2010 Capital One Bowl Media Guide production is underway and fans can pre-order copies online now. Cost of the media guide is $15, which includes shipping and handling. Geaux Zone members can purchase the guide for $7.50 while supplies last.

The bowl guide is 112 pages and features an in-depth look back at the 2009 LSU football season in addition to a complete bowl history of the program. Delivery of pre-orders will begin Jan. 5, 2010. Please allow up to two weeks for delivery via USPS.

An electronic version of the finished product will be available to view online starting Dec. 18 on LSUsports.net.

No. 13 LSU will face No. 11 Penn State for only the second time in school history. Penn State, behind Heisman Trophy winner John Cappelletti, beat the Tigers, 16-9, in the Orange Bowl following the 1973 season in the only meeting between the teams.

The appearance will be LSU’s third in the Capital One Bowl and the first since dropping a last-second 30-25 decision to Iowa in the 2005 game. LSU also took part in the 1979 Capital One Bowl (then called the Tangerine Bowl), beating Wake Forest, 34-10.

This year’s LSU team brings a 9-3 overall mark into the contest as the Tigers finished second in the SEC Western Division with a 5-3 league record. LSU, which has been ranked as high as No. 4 in the nation this year, has been ranked in the top 25 all year.

LSU will be making its 41st appearance in a bowl game, including its 10th straight. The 41 bowl appearances rank ninth all-time, while the current 10-game bowl streak is the nation’s ninth-longest streak.