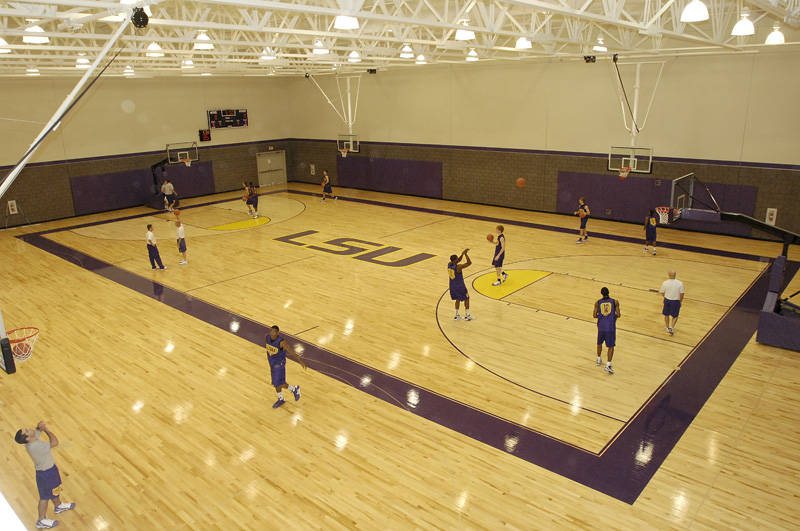 BATON ROUGE ? The look on Tasmin Mitchell‘s face said how much the Friday practice was a little different and in many respects something special.

It was obvious that it was going to be a special Friday afternoon for the rest of the LSU men’s basketball team as well.

Sure it was another early December practice session that teams all over the country were having that day. But this practice session would be so different for this group of Tigers as they would work out for the first time in their very own brand new practice facility.

For months the players have watched the construction and anticipated the day the facility, which is one of the tops in the Southeastern Conference, would be available.

Now they could walk in and practice in one of the two practice gyms that will be part of a larger overall facility that will be completed early in 2010. The area will include the new dressing room for the basketball team, equipment and training facilities and a new media room.

“I really liked being in there (Friday),” said LSU senior Tasmin Mitchell. “It’s very spacious. The goals were good to shoot at. It was a great atmosphere for us to go in and concentrate on the things we needed to do in practice. It’s something we really needed and now are going to be proud to have.”

Each of the two gyms is 11,324 square feet in size and includes a regulation NCAA court in length with two regulation high school courts in the opposite direction. Each gym court is an exact replica of the Maravich Center competition court and includes two portable goals and four overhead retractable goals.

Each gym features a video filming balcony and scorer’s table.

The LSU women’s basketball team was the first team to use the facility last weekend.

The LSU men return to action after final exams on Saturday, Dec. 12, at 7 p.m. against Northwestern State. It is the start of four home games in eight days for the Tigers.