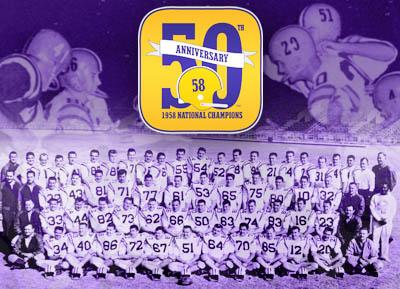 Editor’s Note: LSU Heisman Trophy winner Billy Cannon will be inducted into the prestigious College Football Hall of Fame in New York on Dec. 9.  Watch a recent two-part interview (Part 1 | Part 2) conducted from the field of Tiger Stadium. Dan Borne’ asked Cannon to reflect on this honor and his career with the Tigers and in the NFL. LSU celebrates the 50th anniversary of its 1958 National Championship team, and will honor the 1958 team at this weekend’s game against Ole Miss.

Paul Dietzel blinked under the bright stadium lights of the Orange Bowl. Halfback Don Purvis had just snaked 51 yards through the Miami Hurricanes defense for the night’s first touchdown.

“Good gravy,” Dietzel, then the 34-year-old coach of the LSU Tigers, recalled thinking to himself as his second string took control of the game, “this team could really be something.”

LSU, at a time when Ike was president and Elvis was king, was a dazzling football team that caught the fancy of the nation. The chant, “We’re No. 1,” sung by fans of every school after every victory, had real meaning for the first time at the Old War Skule.

From the glory days of Doc Fenton, a turn-of-the-20th Century football marvel and the heart of an undefeated Tiger team almost too good to be believed, the perennial cry of LSU optimists had been “1908 and next year!”

The Fightin’ Tigers, playing a half-century later on that Friday night in Miami, represented LSU’s “Next Year” ? a team for all seasons, a national champion.

The offensive speed and defensive pursuit of the Bayou Bengals that evening in the Orange Bowl had much larger Hurricanes virtually grasping at the wind. The 41-0 victory four weeks into the season, was the fourth of Dietzel’s Grand Experiment of 1958.

Dietzel was as much alchemist as coach in 1958, mixing diverse elements into a potent football force.

He had recruited superior talent, including Billy Cannon, one of the premier athletes in the country. Cannon, who ran a 9.4 100-yard dash and heaved the 16-pound shot more than 53 feet, was described by Time magazine as “a shattering run-over-them power sprinter,” and was “either the fastest shot-putter or the strongest sprinter in track annals,” according to Track and Field News.

There were other notable athletes, but LSU lacked depth, size and experience ? not an equation usually designed for championships. LSU went into that season with 15 returning lettermen and three seniors from the 1957 Tigers, a 5-5 team that lost four of its last five. The biggest of Dietzel’s linemen weighed 210 pounds, six pounds more than Cannon.

Evashevski, ironically, was a speaker at LSU’s clinic in the spring. He took one look at the Tigers walking through wing-T plays and began to ungraciously mumble about “the scrawniest bunch of players I ever saw.”

There were only 16 Tigers the coaching staff thought could play offense and defense. The best athletes were naturally placed on the first unit, the “White Team,” so named for the color of their practice jerseys, which would ideally play both offense and defense approximately half the game.

The White Team would be backed offensively by the Gold Team (also named for the color of its practice jerseys but shortened to “Go Team” because of a misunderstanding by a sports writer). LSU’s second string backs and third string linemen made up the unit.

The Chinese Bandits, named because a “Terry and the Pirates” comic strip character once termed Chinese bandits as the most vicious people on earth, made up the defensive specialists unit. The Bandits would become popularized as the “best third string in football,” but they never were truly third string. LSU’s second-team linemen and third-team backs comprised the unit, which ended the season with a per-play average yield of 0.9 yards.

“No unit with a Mel Branch,” Bud Johnson, then an LSU sports information director, said, “could logically be called ?third string.’ “

Branch was a superior lineman, clearly one of Dietzel’s best but with a hell-bent-for-leather defender’s temperament.

But that was at season’s end. In the preseason LSU was no more than a projected ninth-place team ? not ninth in the nation, ninth in the SEC ? and was an underdog in its first game against Rice.

If few others had any preseason faith in the 1958 Tigers, Cannon had enough for everybody. He startled backslappers who would ask how the team looked. “It’ll be between us and Ole Miss,” Cannon answered matter of factly.

Cannon, then a junior, was so sure of the Tigers that he took every cent he earned from his summer job at an electric company and, before school opened in the fall, bought almost a section of prime Tiger Stadium seats for the Rebel game. Cannon had almost the pick of seats because LSU in 1958 had only 9,318 season-ticket holders.

LSU ran through a series of legends-in-the-making to open the ’58 season and didn’t play to a home sellout until the seventh game of the season, the week the Tigers achieved their first No. 1 ranking.

“We learned a lot from John Vaught,” Dietzel reflected. “He was a great coach.”

After the 1956 season, Dietzel coached a couple of Vaught’s Rebels in an All-Star game. Chatting after a practice, Dietzel asked about their superb condition. That came, the players said, as a result of 20 50-yard dashes after each practice, sometimes more.

“No, you don’t understand,” Dietzel replied. “I meant every day, what kind of conditioning do you do every day?”

That was the daily regimen, the Rebels insisted.

Dietzel returned to Baton Rouge and promptly informed his team that from then on each practice would end with a series of sprints ? 21 dashes of 50 yards each.

Ole Miss also taught Dietzel the value of quality depth. The Tigers led the Rebels 17-14 at halftime of their 1956 game. “We played as well as we could play,” Dietzel said, “but by the time we got to the dressing room we were worn out.” From that point Ole Miss cruised to a 46-17 victory.

After that game Dietzel started tinkering with substitution plans that, two years later, was his acclaimed three-team system.

Dietzel learned well from Vaught, and together they produced not only unbeaten records going into their 1958 game, but the first Tiger Stadium sellout since the concrete structure was expanded to 67,510 in 1954.

Cannon’s preseason confidence in his team was well-rewarded. While the teams were warming up, Robinson walked past Cannon and asked if he were nervous. “No,” Cannon said. “My section is filling up.”

Purvis, a Go Team halfback who later was an LSU assistant Charlie McClendon, remembered that night and the first Tiger Stadium vividly. “It was an unbelievable setting,” Purvis said. “The atmosphere was electric. There was tension in the air, emotion. Everything seemed so sharp . . . it was as if all 68,000 people were concentrating on every play, every substitution. It was as if the crowd was out there with us, as if the crowd was saying, ?We’re all playing this sucker.’ “

The Tigers may have taken the heart from the Rebels early in the second quarter when a goal-line stand denied Ole Miss any points after gaining a first down on the LSU 2, and with three shots from less than a foot away.

Billy Brewer, two decades later the Rebels’ head coach, fumbled on the Ole Miss 21 and LSU recovered. On a fourth-and-goal from the 4, with 25 seconds remaining until the half, quarterback Warren Rabb rolled out. His receivers covered, Rabb cut toward the end zone and was hit at the 2. As he was going down, another Rebel slammed into the falling bodies, sending Rabb across the goal.

Such are the strange ways in which national titles are won.

“I’ve thought about that game many times in the years since we played it,” Brewer said, “and I really believe that was the start of big-time football in the South. I’m proud we were a part of it. The spirit of those people in that stadium, then and now, is unmatched anywhere. It was a game to remember.”

The Tigers breezed past Duke, 50-18, struggled in the mud and rain with Mississippi State, 7-6, and soundly trounced Tulane after leading just 6-0 at the half.

Its national championship, then voted upon after the regular season, safely tucked away, LSU played one more game, a 7-0 Sugar Bowl victory over Clemson. Rabb broke a hand on the second play of the game, but Cannon threw a third-quarter touchdown pass.

LSU was the overwhelming choice for No. 1. Only one poll, the Football Writers of America, voted another team as the nation’s best. Forest Evashevski’s Iowa Hawkeyes, the other dominant wing-T club, despite a loss and a tie, claimed that minor version of the national championship.

In retrospect, circumstance, as is frequently the case, played as much a role in LSU’s 1958 fortunes as the design of Dietzel’s Grand Experiment.

For one thing, LSU had only one serious injury throughout the season, Go Team guard Manson Nelson broke an arm in the opener against Rice.

Davis directly accounted for two victories, 10-7 over Florida and 7-6 over Mississippi State, with his place-kicking. He was also an excellent punter, with a 41-yard average. Davis may have put on the greatest punting exhibition in Tiger annals by averaging 55 yards on four kicks against Tulane, despite kicking twice into the end zone. In those years the 20-yard difference between the end zone and the point of the ensuing first down were deducted from a punter’s total on a touchback.

Davis was a 24-year-old junior in 1958. He had dropped out of school three years before to join the army, but did not formally resign from LSU, meaning all of his grades that semester automatically became “Fs.” Before he could play college football again, those academic deficiencies had to be made up.

The task of getting Davis eligible again fell to Joe May, a 1956 letterman and a 1958 graduate assistant. Davis moved in with May and the two zeroed in on the books. Two semesters later, Davis was cleared to go.

“When I think back on that team,” May said, “I always come up with one conclusion: that I deserved one of those championship rings, too.”