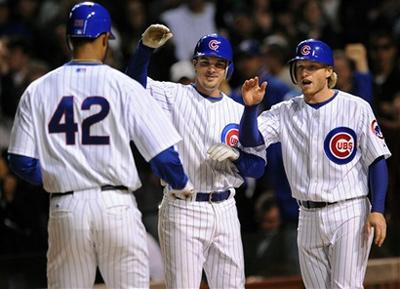 Catcher Ryan Jorgensen of the Minnesota Twins, right-handed pitcher Paul Byrd of the Boston Red Sox and infielders Ryan Theriot and Mike Fontenot of the Chicago Cubs are former Tigers scheduled to appear in the postseason.

Jorgensen, a 2000 LSU letterman, is a reserve catcher for the Minnesota Twins, who play a tiebreaker game Tuesday night against the Chicago White Sox to determine the American League Central Division champion. The winner advances to Game 1 of the AL Division Series on Thursday versus the Tampa Bay Rays.

Byrd and the Red Sox will take on the Los Angeles Angels in the other AL Division Series beginning Wednesday night in Anaheim, Calif.

Theriot and Fontenot ? teammates on LSU’s 2000 national championship team ? will be in Wrigley Field Wednesday night when the Cubs face the Los Angeles Dodgers in Game 1 of their National League Division Series.

“We certainly will be following the former Tigers during the playoffs,” said LSU coach Paul Mainieri, “and our best wishes go out to each of them. LSU has an outstanding tradition of producing major league players, and we’re very proud of their accomplishments.”

Byrd, a member of LSU’s 1991 national championship team, posted an 11-12 mark this season for the Red Sox and the Cleveland Indians, who traded him to Boston on August 12. The Louisville, Ky. native worked 180 innings in 30 starts, recording a 4.60 ERA with 34 walks and 82 strikeouts.

Theriot, a Baton Rouge native, played in 149 games at shortstop for the Cubs during the regular season, batting .307 with 19 doubles, four triples, one homer, 38 RBI, 85 runs and 22 stolen bases.

A total of 13 former LSU players appeared on major league rosters during the 2008 regular season.

Several former Tigers enjoyed successful years for their MLB clubs, including outfielder Brad Hawpe, who launched 25 homers and 85 RBI for the Colorado Rockies, and right-handed reliever Brian Wilson, who recorded 41 saves for the San Francisco Giants and pitched in the All-Star Game in July.

Left-hander Greg Smith posted a 4.16 ERA in 32 starts for the Oakland Athletics, and 39-year-old right-hander Russ Springer, pitching in his 16th major league season, was 2-1 with a 2.32 ERA as a reliever for the St. Louis Cardinals.