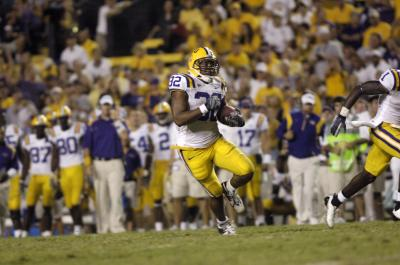 BATON ROUGE — LSU running back Charles Scott continued his climb up the national rushing charts this week as the Tiger junior is now No. 5 in the nation in rushing yards per game with a 133.8 average.

Scott, who has rushed for at least 100-yards in all four of LSU’s games in 2008, has racked up 535 yards and six touchdowns on 71 carries. He’s averaging a staggering 7.5 yards per carry.

Scott, who leads the SEC in rushing for the fourth straight week, is the only running back in the conference averaging over 100 yards on the ground per game. Scott is coming off a 141-yard, two-touchdown performance in LSU’s 34-24 win over Mississippi State on Saturday.

Scott’s 535 rushing yards is the most by an LSU player since 1997 when Cecil Collins rushed for 583 yards in the first four games of the season.

Scott is also one of just three players in LSU history to open a season with four straight 100-yard rushing games. Steve Van Buren holds the school record for 100-yard games to open a season by accomplishing the feat in the first seven games in 1943. Charles Alexander rushed for 100 yards in LSU’s first four games in 1978.

Other Tigers in the national rankings include Brandon LaFell at No. 33 in the nation in receiving yards per game with 87.0 per contest and quarterback Jarrett Lee at No. 32 in the country in pass efficiency with a 146.5 rating.

Lee, who made his first career start last week against Mississippi State, has completed 45 of 77 passes for 643 yards and six touchdowns.

LaFell, who leads the SEC in yards per game and is third in the league in receptions per contest, has hauled in 22 passes for 348 yards and three scores in the first four games of the season for the Tigers.

LSU enjoys an open date on Saturday before returning to action on Oct. 11 when the second-ranked Tigers travel to face Florida in Gainesville at 7 p.m. in a game that will be televised nationally by CBS.