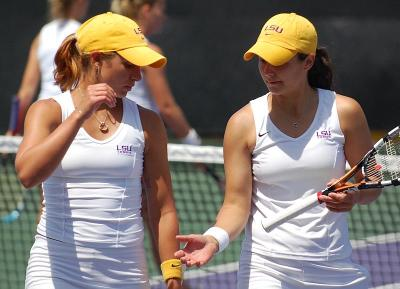 PACIFIC PALISADES, Calif. — LSU’s 11th-ranked duo of Megan Falcon and Mykala Hedberg will take on Duke’s Ellah Nze and Reka Zsilinszka in the first round of the qualifying portion of the Riviera/ITA All-American Championships on Tuesday.

Falcon and Hedberg are also listed as the No. 1 seed in the 32-team qualifying bracket that will be played at the prestigious Riviera Tennis Club. The Lady Tiger tandem will take on the duo from Duke at 11 a.m. CT.

“Megan and Mykala have been playing great doubles to this point and hopefully it can continue in this tournament. Because it’s the All-American tournament every match will be tough, so I look forward to seeing them compete and give their best effort,” LSU head coach Tony Minnis said.

The pair is 4-0 on the season with four dominant wins in the Gopher Invitational. Last season Falcon and Hedberg finished 12-5 with a No. 28 final ranking and an appearance in the NCAA first round.

Falcon, ranked No. 15 nationally in singles, will compete in the singles main draw of the tournament beginning Thursday.