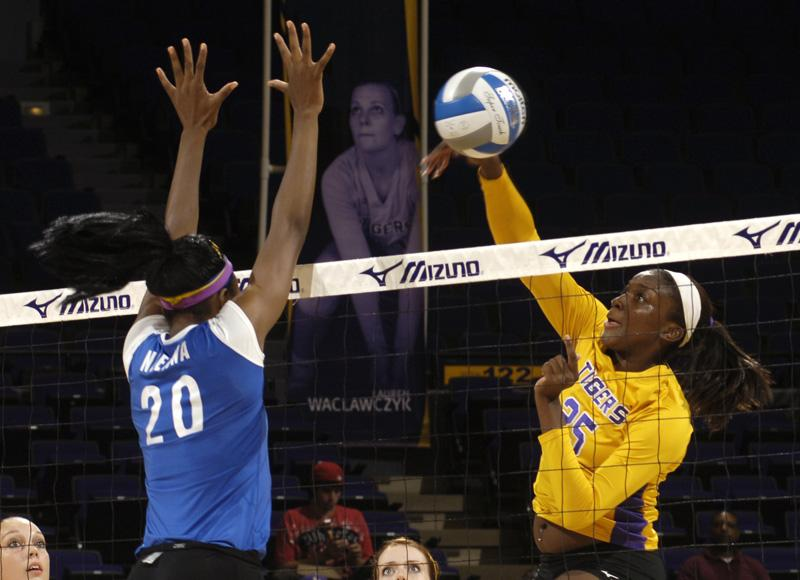 BATON ROUGE — They had multiple set points to force a fourth set, but the LSU volleyball team could not capitalize on those opportunities and was swept by Kentucky (25-17, 25-21, 29-27) in the Maravich Center on Sunday afternoon to close out the weekend.

The Tigers defeated Tennessee on Friday to open Southeastern Conference play, but couldn’t carry over the momentum. They fell to 6-5 (1-3 SEC) with the loss, while Kentucky improved to 13-2 (4-0 SEC) to extend its winning streak to 10 straight matches. It’s the longest for the Wildcats since the 1993 season under head coach Fran Flory ? the Tigers’ current head coach.

After falling in sets one and two, the Tigers had several opportunities to bring the match into a fourth set owning multiple set points. But Kentucky never let up, and came from behind to win the decisive set, 29-27.

“We could never get on track offensively,” Flory said. “They blocked several of our attempts right at the start, and we did not show a lot of mental toughness after. We lacked poise on the offensive side of the ball for the rest of the match.”

But probably the biggest discrepancy came in blocks, as Kentucky collected 14 to just five for LSU.

“Allowing 14 blocks in a three-set match is a ridiculous number of blocks,” Flory said.  “I think that was a combination of things, but we have got to do a better job of showing more shots. We have become way too predictable and have to show more versatility.”

No Tigers had double-figure kills, but both middle blockers Brittnee Cooper and Lauren DeGirolamo contributed nine. Sam Dabbs and Brittney Johnson split time at setter, with the former collecting 24 assists and the latter 10. Elena Martinez led the defense with 16 digs.

Just like in eight previous matches, including Friday’s against Tennessee, the Tigers couldn’t capture the first set. The teams stayed close and exchanged leads early in the frame, but Kentucky went on a run midway through to take a 14-7 lead. LSU regrouped a little toward the end, but not enough, dropping the first set, 25-17.

LSU went on a 5-1 run to open set two, but Kentucky came back to tie things up at 6-all and then take a lead at 7-6. LSU called a timeout after another point gave the Wildcats an 8-6 advantage.

After the Wildcats had opened up a 16-12 lead of their own, the Tigers went on a 3-0 run to get within one, forcing a UK timeout. Kentucky scored the next point out of the timeout, but LSU forced a tie at 17-all.

But then Kentucky scored four of the next five points, as LSU used a timeout down 21-18. Despite the Tigers getting within one at 22-21, the Wildcats managed to close out the set, 25-21, and take a 2-0 lead into the locker room.

The Tigers came out firing to open the third frame taking a 9-4 lead. They extended that lead to 14-8 and UK called a timeout.

The Wildcats fought back, and LSU used both of its timeouts by the time its lead was cut to two at 20-18. The score knotted at 23-all, DeGirolamo came up with a big kill to give the  Tigers a 24-23 advantage and their first set point. But the Wildcats fought off several set points and forced a match point of their own at 28-27, capitalizing on it for a 29-27 third-set win and earning a match sweep.

The Tigers continue this homestand with matches next weekend against Ole Miss and Arkansas in the Maravich Center.