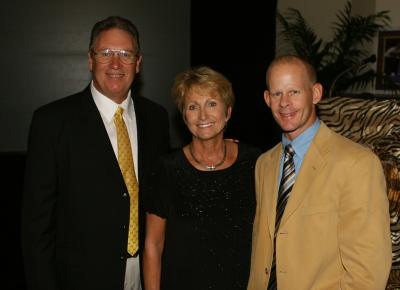 BATON ROUGE — The annual LSU gymnastics awards banquet was held Friday night at the LSU Faculty Club, highlighted by Athletics Director Joe Alleva presenting the 2008 team members with their Super Six rings after they reached the finals last year for the first time in program history.

“I really applaud the great individual championships on this team,” LSU head coach D-D Breaux said. “The team accomplished bench mark rankings. We will all wear our Super Six rings with pride. They represent the hard work and pride that this team has every time they represent LSU.”

In addition to team accolades, individual achievements were recognized as well.

Junior Ashleigh Clare-Kearney had a record year for the Tigers, being named the SEC Gymnast of the Year and winning the SEC All-Around ? the first LSU gymnast to do so since Rachel Fruge’ in 1991. She also was an All-American on bars and floor and the SEC Champion on floor exercise.

Sophomore Susan Jackson became just the fourth LSU individual NCAA Champion and first on vault in 2008. She also was an All-American in the all-around, vault, beam and floor. She was the SEC Champion on vault as well.

Sophomore Summer Hubbard rounded out LSU’s All-Americans with her selection on uneven bars.

LSU boasted four academic All-Americans and six gymnasts on the SEC Academic Honor Roll. Additionally, the Tiger gymnastics squad won the Tiger Award for the LSU team with the most community service hours, the highest GPA and national placement in postseason competition.

Three special awards were given out. The Most Improved award went to sophomore Sabrina Franceschelli, the Dee Dee Fulmer Gilbert Award for academic and athletic excellence was presented to senior Kristi Esposito, and the Eye of the Tiger Award was given to sophomore Yvette Triay.