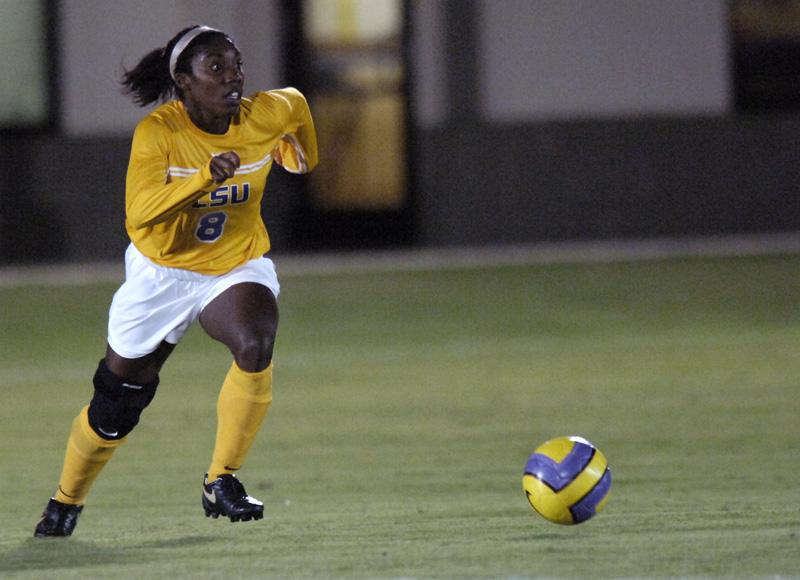 STARKVILLE, Miss. — Junior All-American Rachel Yepez scored a pair of second half goals to lead the ninth-ranked LSU soccer team to a 4-1 win over the Mississippi State Bulldogs on Friday night at the MSU Soccer Field in the Southeastern Conference opener for both clubs.

“It’s great to get off to a fast start with a win in our conference opener, especially on the road,” said LSU head coach Brian Lee. “The team showed great maturity in coming back from an early deficit, but you have to credit Mississippi State for having a great tactical plan and executing it in the first half. I thought we showed great poise in playing the full 90 minutes.

“We knew coming in that this would not be an easy game, and Mississippi State played with great intensity tonight. It’s always big to get a win on the road in this league.”

With the score knotted at 1-1 coming out of the halftime break, Yepez scored the game-winner in the 58th minute of play when she gathered a rebound in front of the goal and fired a shot into an open net from inside the six-yard box for her fourth goal of the season.

Yepez stayed composed in the box when Mississippi State keeper Taryn Holland saved the initial shot off the head of junior Michelle Makasini. The scramble in front of the net was set up when junior Malorie Rutledge played a perfect cross to Makasini at the far post from her position on the right wing for the first of her two assists on the night.

Yepez added her second goal of the match in the 73rd minute when she finished a breakaway one-on-one with the keeper following a precise through ball from senior captain Roslyn Jones.

“We felt like we were OK at the half. We just felt like we needed to settle down and start playing our game,” Yepez said. “I was fortunate enough to get on the rebound quickly on the first goal. We work on that all the time in practice, and it paid off tonight. Roslyn just played a great through ball to me on the second goal and I was able to finish. It was big for us to win this game.”

With her two assists on the night, Rutledge set the school’s all-time assist record with the 23rd and 24th of her career just seven games into her junior campaign. She breaks the previous record of 22 career assists set by former Tiger Rachel Cohen during her four year career from 2000-03.

“We were pumped up to play this game, but I also think we were a little nervous to start because it was our SEC opener. It was big for us to get this win,” Rutledge said. “We practice our crossing and finishing every time we train, and we got on the end of a few of those tonight. That’s part of my game that I work on a lot, and I always feel like I can improve.”

The Tigers faced their first deficit of the season when Mississippi State senior Mariclaire Fancher put the Bulldogs on top 1-0 in the 20th minute with her first goal of the season.

Fancher received a pass from senior Bethany Frazier in open space on the right side of the penalty area and chipped a shot over the shoulder of LSU goalkeeper Mo Isom, who came off her line to cut off the angle on the shot. The ball took two bounces and found the net inside the far post.

But the Tigers kept the pressure on the Bulldog defense nearing the end of the half, and Rutledge scored the equalizer with just 39 seconds remaining on a free kick from roughly 30 yards directly in front of goal. When Jones drew a foul in the waning moments, Rutledge stepped up and rifled a shot into the top-right corner of the net for the equalizer.

For Rutledge, it was her second goal of the season and first since scoring the game-winner in a 2-0 shutout of Northwestern in the opening game of the Lakeside Invitational on Aug. 31.

Despite allowing the first goal of the match, LSU dominated possession in the opening half while owning a 12-4 advantage in total shots with a 6-1 edge in shots on goal and a 4-0 count in corner kicks. The sides went into the halftime locker room deadlocked at 1-1 on the scoreboard.

“It was big for us to score the equalizer before the end of the half and gain some momentum after going down by a goal,” Lee said. “Malorie really showed her class on that free kick. She’s a kid who prides herself on working to improve in just those kinds of situations. There is not a doubt in my mind that she was the best player on the field tonight for either side.”

Junior Melissa Clarke provided the final margin in the 78th minute with her third goal of the year on a shot inside the left post from the middle of the area following an entry pass from Rutledge.

LSU’s domination was evident in the final stat line as the Tigers outshot the Bulldogs in the game by a count of 29-5 with a 13-1 edge in shots on goal and 6-0 advantage in corner kicks.

The Tigers will return to the pitch on Sunday afternoon as they travel to Oxford, Miss., to take on the Ole Miss Rebels in a match set for a 1 p.m. kickoff. They will then wrap up their five-game road swing next weekend with a pair of matches in the SEC East as they battle Tennessee on Oct. 3 in Knoxville followed by a match against Georgia on Oct. 5 in Athens.