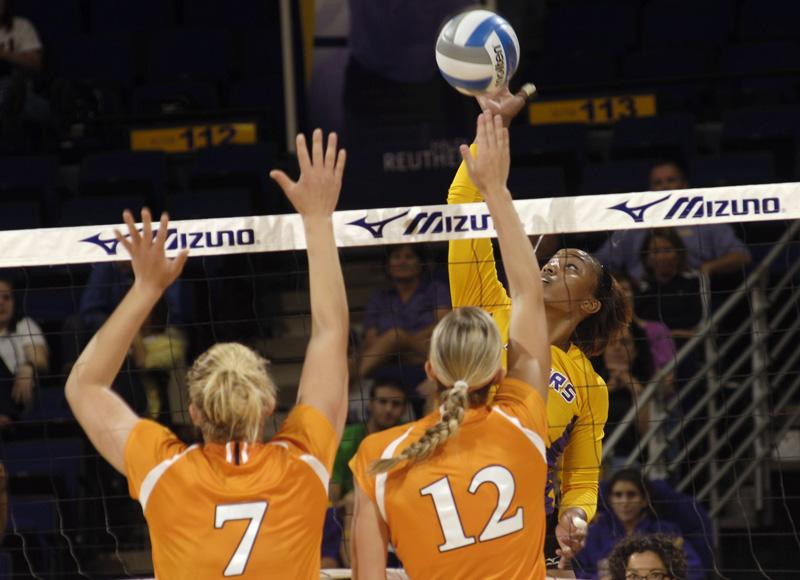 After playing their first nine matches on the road, the Tigers (6-4, 1-2 SEC) used their home court to their advantage to capture their first Southeastern Conference victory and snap Tennessee’s (7-5, 2-1 SEC) three-match winning streak.

“Getting this win at home was huge for us,” LSU head coach Fran Flory said. “And the support from our crowd I think was a big factor in why we won. For what we are trying to accomplish this season, we had to win this match. Home matches in the SEC are must-wins, and I’m pleased with the way our team came out to play tonight.”

LSU fell in set one to open the match, but was able to reel off three straight set victories to close out the match. The Tigers hit at a .268 clip while holding Tennessee to just .224.

Four separate Tigers had double-figure kills on the evening, including Kyna Washington and Brittnee Cooper who each had 15. Cooper continued her efficiency at the net, her 15 kills coming with a .571 clip. Lauren DeGirolamo‘s 14 kills were on .444 hitting.

Elena Martinez paced the defense with 22 digs to lead all competitors. Sam Dabbs had 12 to add to her 53 assists. It marks her fourth double-double of the year.

LSU has lost set one in eight of its 10 matches this year, but has still managed to come back and win on four of those occasions.

“We played better in the first set today, but still not the way we needed to. For some reason this team still likes to come out and size up their opponents before just playing their match,” Flory said. “We’ve tried to work on that and that’s something we’ll definitely have to correct if we’re going to win Sunday.”

The Tigers will play match two of a four-match homestand Sunday against Kentucky at 1:30 p.m. in the Maravich Center.