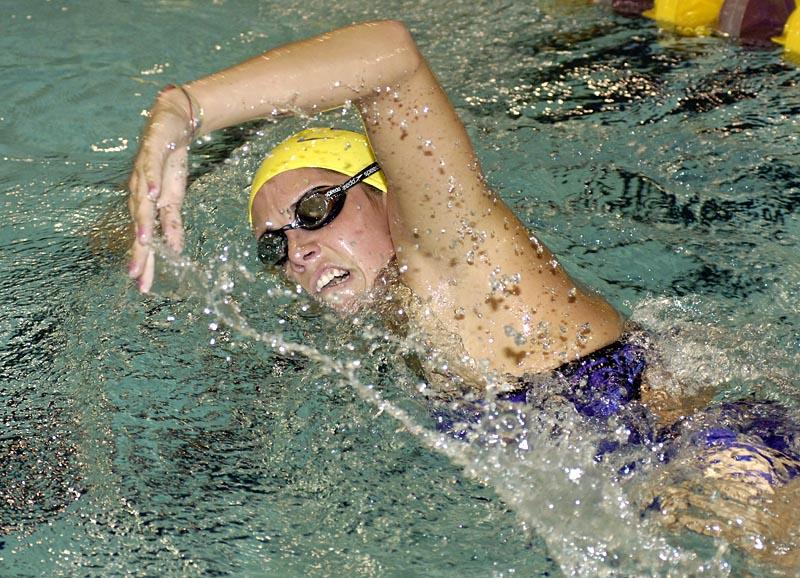 BATON ROUGE — Bragging rights over LSU swimming and diving’s annual Purple and Gold Intrasquad meet belong to the Gold team for the second consecutive year after the squad defeated Purple, 146-126, in the fun-filled exhibition Friday afternoon at the LSU Natatorium.

The Gold, selected by captains Katherine Noland and Connor Farber, tallied 24 points in the final four races to emerge victorious. Noland enjoyed a fantastic start to the 2008-09 season, registering victories in the 50- and 150-yard freestyle events and the 100-yard butterfly to give her team 15 crucial points, but the overall success of the team she helped construct is what pleased the senior leader most.

“A lot of our athletes swam really well today,” said Noland. “That was our goal, to get to race against each other and become better so that when we see Florida in a month, we’ll have the experience.”

In addition to Noland, quite a few swimmers on the Gold squad opened the season with solid swims. Sophomore Brooke Barnett and freshman Morgan McGee began the year in promising fashion, combining to score 20 points in individual competition.

Barnett took first-place in both of her events, clocking a time of 4 minutes, 5.21 seconds in the 400 free and reaching the wall in 8:24.25 in the 800 free. McGee, a Shreveport, La., native, won both backstroke races, swimming the 100 back in 56.52 and the 150 back in 1:30.13. Furthermore, sophomore Jane Trepp and senior Vanessa Duenas notched victories for the Gold in the 100 breaststroke and the 150 butterfly, respectively.

On the men’s side, Farber and teammates Julius Gloeckner and Nate Telep helped the Gold’s cause with fine performances. Farber and Gloeckner carried the men on the Gold squad, recording three wins a piece. Telep teamed with freshman Ben Decker to give the Gold a 1-2 finish in the 150 breaststroke.

“I thought we had some really fast swims, especially at this time in the season,” said assistant coach Kevin Clements, who oversaw the Gold team. “We’re kind of getting into it. With (Hurricane) Gustav, it kind of set us back a week, so as far as what they’re doing in the water and how fast they’re swimming out there, I couldn’t be happier.”

More than a few swimmers stood out on the Purple team in the losing effort. Sophomore Hannes Heyl continued to prove why he’s considered one of the most valuable athletes in the program as the German secured first-place in the 50 free and both the 100 and 150 backstrokes and played a pivotal role on Purple’s victorious 200 medley relay squad. Senior Roy Chambers provided the LSU fans in attendance with one of the most exciting finishes of the afternoon, edging Telep in the 100 breaststroke by only two one-hundredths of a second with a time of 58.91.

Seniors Katie Gilmore and Victoria Givens began the year on good notes as well. Gilmore beat the field in the 100 free with a mark of 53.13, and Givens seized the victory in the 150 breaststroke, swimming the race in 1:45.31.

The divers also took part in the action and pleased the crowd with their talents in two skills competitions on the 1- and 3-meter springboards. Senior Niko Dalman swept the skills events on the men’s side, while freshman divers Katie Lybbert and Chelsea McCorvey flashed their tremendous upside as each took first-place in one of the competitions.

The season officially begins in just under a month when Southeastern Conference rival, Florida visits Baton Rouge. The Tigers will battle the Gators on Oct. 22 at 2 p.m., and the Lady Tigers will face them on the following day, Oct. 23 at 2 p.m. Check www.LSUsports.net for any updates or changes leading up to the program’s season-opening dual meet.