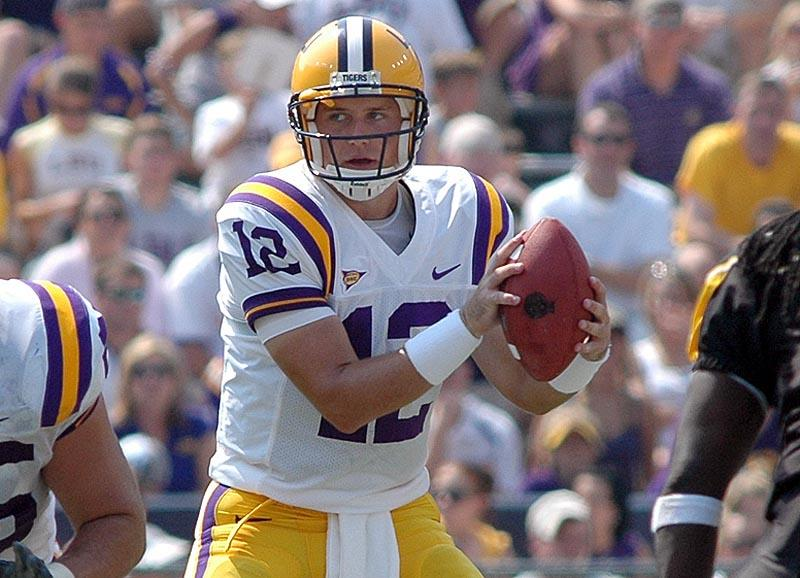 BATON ROUGE ? LSU redshirt freshman quarterback Jarrett Lee has been named AT&T ESPN All-America Player of the Week for his performance in the Tigers’ 26-21 win at No. 9 Auburn last weekend, it was announced during halftime of the Southern Cal-Oregon State game on Thursday night.

Lee rallied LSU from a 14-3 halftime deficit by throwing a pair of second half touchdowns, including a game-winning, 18-yard toss to Brandon LaFell with 1:09 remaining in the fourth quarter. Lee, who came in for an injured Andrew Hatch, was 11-of-17 for 182 yards in the final two quarters after throwing an interception that led to an Auburn touchdown prior to halftime.

Lee pulled the Tigers to within 14-10 midway through the third quarter when he connected with Chris Mitchell on a 39-yard touchdown pass. Lee finished a perfect 4-of-4 on the final drive after taking LSU down the field on a 7-play, 54-yard game-winning drive to ensure the Tigers’ first victory at Auburn since 1998.

Lee was the second LSU player to be named a finalist for the award this season but the first to win it. Running back Charles Scott earned the recognition when he rushed for 160 yards and two scores in the Tigers’ season-opening win versus Appalachian State.

The fifth-annual AT&T ESPN All-America Player of the Week is chosen by college football fans across the nation each week during the season. ESPN analysts select the four candidates based on their performance on the field and fans then text in their votes from their mobile phones.