It's GameDay: No. 5 Tigers Expect Tough Test from MSU 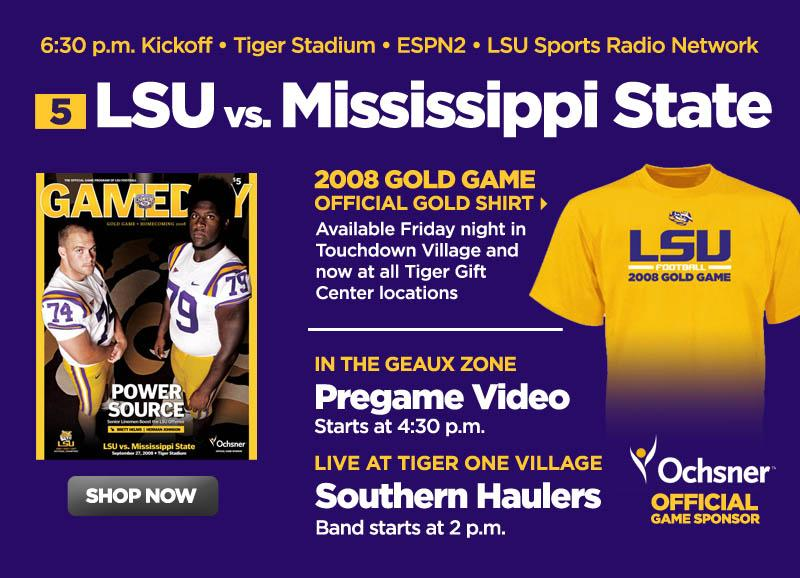 BATON ROUGE — If LSU needed any reminder about the significance of Saturday’s game against Mississippi State, all they would need to do is look at the highlights of Oregon State’s upset of top-ranked Southern Cal on Thursday night.

Oregon State’s win over Southern Cal proved once again that in the world of college football, anything is possible on any given day. And with that mindset, LSU goes into Saturday’s crucial Southeastern Conference contest expecting to take Mississippi State’s best shot.

Kickoff for LSU and Mississippi State is scheduled for 6:36 p.m. in a sold out Tiger Stadium. The game will be televised to a national audience by ESPN2. The game will also serve as the school’s annual Gold Game and fans are encouraged to wear gold to the contest.

LSU, ranked No. 5 in the nation in the Associated Press Top 25 and No. 6 in the USA Today Coaches poll, is 3-0 overall and 1-0 in league play following last week’s 26-21 win over top 10-ranked Auburn. Mississippi State dropped a 38-7 decision to unranked Georgia Tech in Atlanta as the Bulldogs fell to 1-3 overall.

Mississippi State is 0-1 in conference action after a 3-2 setback to Auburn two weeks ago. It’s the Mississippi State team that battled Auburn before dropping a one-point decision that LSU is expecting to see in Tiger Stadium on Saturday.

“We are expecting to get their best shot,” LSU coach Les Miles said. “I watched how Mississippi State played against Auburn and they are a very dangerous opponent. They are very physical on both sides of the football and they play with a tenacious and aggressive attitude on defense that can give you serious issues.

“We understand that this is going to be a great challenge for us. I know that Coach (Sylvester) Croom does a great job in preparation, and I know that they’ll be prepared and ready to play when they come to Tiger Stadium.”

Last year, LSU opened its national championship season with a 45-0 win over the Bulldogs in Starkville in a game that saw the Tigers force seven turnovers, including picking off six State passes. LSU turned those seven turnovers into 38 points as the Tigers broke open a tight game early in the third quarter.

In what is expected to be a physical battle in the trenches between both teams, the Tigers will continue to rely on the running of junior Charles Scott. Scott, who leads the SEC and ranks seventh in the nation in rushing, is coming off a 132-yard performance against Auburn last week, an effort that earned his SEC Offensive Player of the Week honors.

When the Tigers aren’t giving Scott the ball on the ground, they have used a two quarterback system operated by sophomore Andrew Hatch and redshirt freshman Jarrett Lee. Last week, Lee came off the bench to relieve and injured Hatch and rallied the Tigers to the come-from-behind victory by throwing a pair of TD passes in the second half, including one to Brandon LaFell with just over a minute left to clinch the victory.

In three games, Lee has connected on 27 of 50 passes for 382 yards and four scores. Hatch, who suffered an injury midway through the third quarter of the Auburn game, has been limited in practice this week, but is expected to play against Mississippi State.

Defensively, the Tigers bring a unit into the contest that is allowing just 12.3 points and 252.7 yards per game. With a defensive front four that is considered among the best in the nation, the Tigers have thrived through their first three games by stuffing the run and pressuring the quarterback.

Safety Harry Coleman is tops on the squad with 21 tackles, while defensive end Rahim Alem is second the SEC with a pair of sacks and three tackles for losses.

LSU brings one of the most dangerous return specialists in college football into the game on Saturday in speedster Trindon Holliday. Holliday, who has returned both a kickoff and punt for a TD in his career, is coming off a tough outing at Auburn last week when he muffed two punts.

However, Miles said he expects Holliday to return both punts and kickoffs against the Bulldogs. Holliday is averaging 24.0 yards on two kickoffs and 26.8 yards on six punt returns. LSU placekicker Colt David is the school’s all-time leading scorer in terms of points by a kicker and he provides a steady leg in both short and long-range field goal attempts.

Punter Brady Dalfrey appeared to have had his breakthrough game last week against Auburn, averaging a staggering 48.3 yards on six punts. Of Dalfrey’s six punts against Auburn, four were downed inside the 20-yard line in what was his best single-game performance of his career.

After Saturday, the Tigers will enjoy an open date on Saturday, Oct. 4 before returning to SEC action at Florida on Oct. 11.