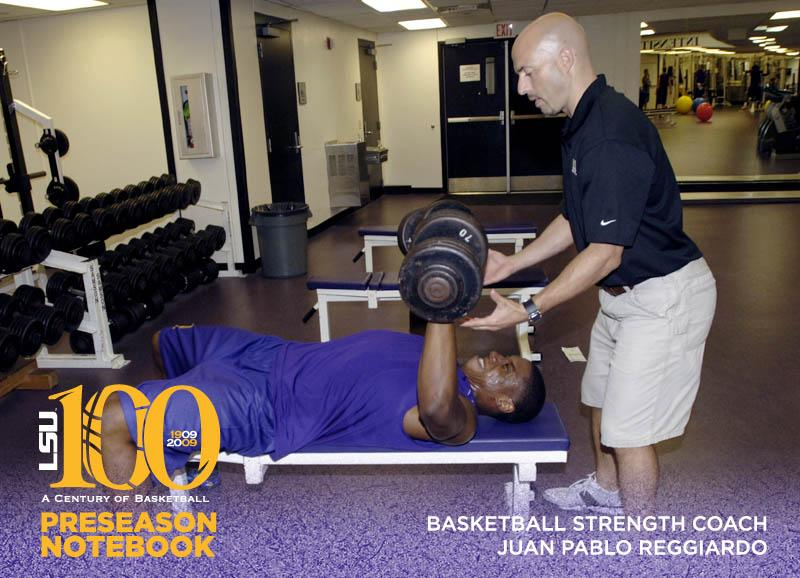 There’s not much that Juan Pablo Reggiardo doesn’t like these days.

LSU’s new basketball strength and conditioning coach like the facilities he has to work with, the campus he works at and the passion of the LSU fans.

More importantly, he is excited about the approaching basketball practice schedule and 2008-09 season and his passion is in full bloom as he tries to prepare the LSU Tigers basketball team for what lies ahead.

Reggiardo, who followed new Head Coach Trent Johnson from Stanford, has a philosophy in his strength and conditioning program that works the while body.

“The main thing with these guys is getting their body right,” Reggiardo said in his office earlier this week. “Flexibility, mobility issues. We need to address those first to make sure they are moving correctly … We want to make sure we get rid of anything that might inhibit their movements and cause stress in any of the other body parts. Those are the kind of things we have been working on since we got here. We’ve been training them how to move, workout flexibility, mobility, things like that.

“The thing I try to impart on these guys is not about one specific exercise or drill, it’s consistency in training. They need to be in here every day doing something whether it’s in here in the weight room or getting shots up or focusing on their nutrition such as making sure they get up in time to get breakfast in the morning. To me the biggest thing is that they are consistent in the things that we are trying to teach them and doing them on a regular basis,” the 36-year-old University of Arizona graduate said.

Reggiardo admits to getting started like most strength coaches who were former athletes. “A lot of us weren’t as good an athlete as we would like to be so the old saying is if you can’t play you’ve got to coach,”  he laughed.

A move to California and an internship at the Riekes Center for Human Enhancement, a non-profit program for adolescents in Menlo Park, would be the first step in a journey that would lead him to Baton Rouge and LSU.

“It was a fantastic job,” Reggiardo said about his time at the Riekes Center where he eventually became the Director of Athletics responsible for overseeing the development of all of the programs within the athletic department.

“My mentor at that location (John Murray) was the strength coach at Stanford for Mike Montgomery and when Mike went to the (Golden State) Warriors, (Murray) got the job there, but he recommended me for the position at Stanford. I had been helping him for a couple of years volunteering so the coaches knew me. Trent’s first year at Stanford was my first year as basketball strength and conditioning coach.”

Reggiardo is not having any trouble liking his new assignment.

“LSU is fantastic and the campus is beautiful,” he said with a quick smile. “My first day here when I was touring, I saw all the beautiful trees, the great facilities, what a beautiful campus. Then there are the fans ? the fervor that they have for the sports here is unlike anything I have ever experienced. I love the passion that people have for athletics. The people who work here are great. Everyone has been very supportive of the new staff. We just want basketball to get going.”

You Are What You Eat

Reggiardo pulled no punches about how important educating student-athletes about nutrition can be.

“I’m very big on nutrition,” he said. “The guys really need to focus on what things can I do to help myself. We’re teaching the guys the importance of waking up and getting breakfast in the morning to choosing what foods to eat depending on what we have going on. Most college athletes, its burgers, fries, pizza, what they are used to … fruits and vegetables are something that mom and dad tell about so they don’t do that much.  It’s kind of about teaching them that there are no bad foods. You try to get them to explore different fruits and vegetables and healthier options that you haven’t tried before. Try to get them a little curious and try one piece of fruit or one vegetable. Nutrition is huge, no doubt about it. I’m big on that. That’s an educational process that usually takes a while for these guys to understand and embrace.”

Details are still to be formally announced but mark the date of Oct. 28 on your calendar for the first real public look at the LSU Tigers basketball team.

Trent Johnson‘s squad will have some type of public scrimmage on that day at a time to be announced in the Maravich Assembly Center. With the team not playing any public exhibition games this year, this will be the only major chance to see the team in action prior to the start of the season on Nov. 15 at 1 p.m. against Jackson State, the date of the first ever Maravich Center-Tiger Stadium basketball-football doubleheader as LSU will face Troy at 7 p.m. that night in football.

Final Word From The Strength Coach

“If you have an athlete that is out of shape, that’s generally when injuries occur, when they are fatigued and they are moving incorrectly. Conditioning is important, especially at this time of the year. Practice starts in three weeks.”