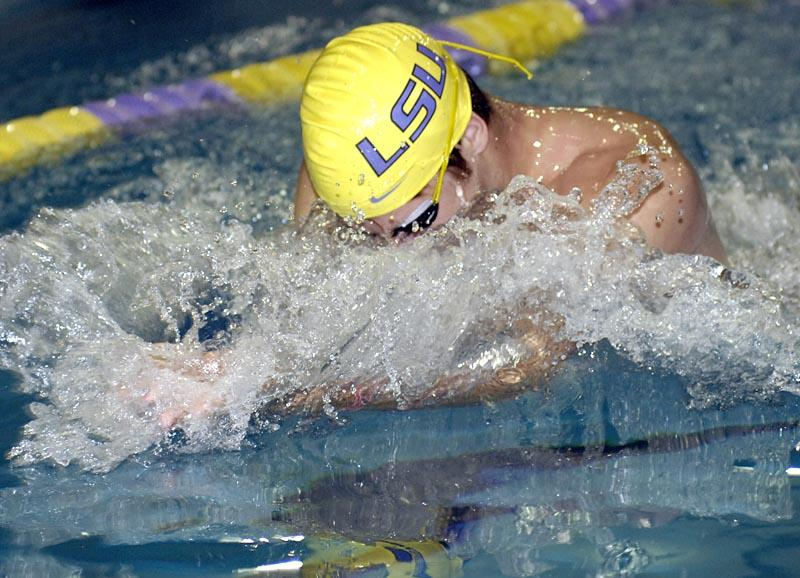 BATON ROUGE — After weeks of training, the LSU swimming and diving teams get their first taste of competition in the 2008-09 season with the Purple and Gold Intrasquad at 3 p.m. Friday in the LSU Natatorium.

Each year, the newly-elected captains from the men’s and women’s teams are given the opportunity to coach the Purple and Gold squads and make all of the decisions pertaining to their respective teams. Seniors Chris White and Monica McJunkin have been given the honor of guiding Purple this season, while seniors Connor Farber and Katherine Noland have been put in charge of Gold.

“The Purple and Gold Intrasquad is a fun meet,” said head coach Adam Schmitt. “The captains get to select their teams, pick the events for their teammates and choose a lineup. They get to be coaches a little bit. They get to be in our shoes as they try to beat the other team, and I think that’s kind of a neat part of it.”

This season’s Intrasquad will also include a new flavor with the addition of some odd-distance events such as the 150-yard freestyle and the 500-yard freestyle relay. Furthermore, the exhibition allows diving coach Doug Shaffer‘s athletes to show off their springboard skills.

“We’re excited to get the season underway and start competing,” said Shaffer. “We’re still very much into the early part of the season, so what I’m looking for is for them to focus on the things we’ve been working on in training, not so much their performance or their scores. However, it’s an opportunity to flip and twist and an opportunity to do some skills in an exciting, team environment.”

The program returns a combined 19 seniors this year, including 10 athletes who have earned All-America honors or shattered school records during their careers. The German trio of Christoph Lubenau, Hannes Heyl and Julius Gloeckner and senior sprinter Brandon Selts headline the men’s swimming efforts entering the season. Noland, a former three-time All-American, and fellow senior Katie Gilmore, who owns four school relay records and the 50 freestyle mark, lead the women’s squad into 2008-09.

Moreover, senior Niko Dalman, the school’s 3-meter springboard record-holder and junior Rachel Ware, the reigning Southeastern Conference Women’s Diver of the Year, figure to be two of the top male and female divers in the conference, if not the nation, this season.

In last year’s Intrasquad, Gold emerged victorious for the first time since 2002. The squad defeated Purple, 162-135, to break Purple’s four-year winning streak in the annual affair.

The Natatorium is located at the corner of Nicholson Drive and West Chimes Street, in front of the old Tiger Park and adjacent to W.T. “Dub” Robinson Stadium (tennis courts). Admission to all home meets is free.