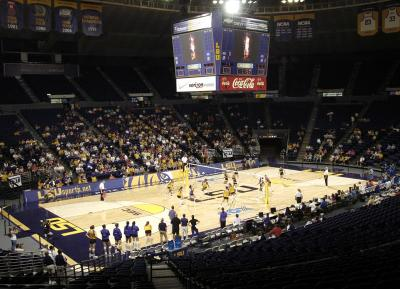 BATON ROUGE — After playing its first nine matches on the road, the LSU volleyball team is set to open its home slate in a Southeastern Conference showdown against Tennessee on Friday at 7 p.m. in the Maravich Center followed up by Kentucky on Sunday at 1:30 p.m.

LSU was supposed to play host to the Mizuno Tiger Classic on Sept. 5-6, but had to cancel because of Hurricane Gustav. They instead played three straight road tournaments and then opened up SEC play on the road last weekend at South Carolina and Florida. The Tigers have compiled a 5-4 (0-2 SEC) record through their first nine matches, including tough losses against three teams currently in the top 15.

“We are so happy to be home this week,” LSU head coach Fran Flory said. “We have seen a little wear and tear being on the road so much, and we are really excited about having Tennessee and Kentucky ? two very good teams. They will both come in ready to go.”

Offensively, Kyna Washington leads the team into action this weekend with her team-best 3.39 kills per set. Brittnee Cooper‘s .321 hitting percentage is tops on the team as well. Elena Martinez contines to pace the defensive effort with a total of 126 digs, an average of 3.82 per set.

The Vols have opened up their year with a 7-4 record, including back-to-back wins over Alabama and Mississippi State last weekend to open SEC play 2-0 for the first time since 2004. Tennessee libero Chloe Goldman has put up some of the best numbers in the league so far this season and is the two-time defending SEC Defensive Player of the Week.

LSU leads the all-time series with Tennessee, 29-16, but the teams split decisions in 2007, each winning on its home court. While LSU swept the Lady Vols in Baton Rouge, however, it took Tennessee a 16-14 score in game five to win in Knoxville. The Tigers also beat a ranked Tennessee twice in 2006 while at No. 13 and No. 25. In fact, UT has not beaten LSU in Baton Rouge since 2000.

There have been several changes put in place for volleyball matches in the PMAC this year. Seating for volleyball matches from now on will be limited to the lower bowl of the Maravich Center in the 100 sections only. Doors open an hour and a half before each match, and fans with general admission tickets should enter through the lower southeast, southwest and northwest entrances only instead of on the concourse level as in previous years. Credentialed personnel should enter through the lower northeast corridor.

Ticket sales and will call will be in outside ticket windows at the southwest corridor as will the fan zone and merchandise tables. The ticket booth will remain open through the second set of all matches. Students and faculty using ID cards as well as those on the player pass list to enter volleyball matches are to use this southwest entrance. For families coming to experience LSU volleyball, the Kid Zone will be located on the floor level of the northwest corridor.

Flory urges fans to come support the team in their quest for a fourth straight SEC Western Division title.

“We would love to have everyone behind us,” she said. “When we play at the outside, Kentucky will have 3,000 fans in the stand. When we play at other SEC venues there are 2, 000 and 3,000 people there. We’d love to have that type of environment welcome us to the PMAC on Friday night and certainly again on Sunday afternoon. To be able to say that you guys have done a great job so far and we are behind you. Hopefully the fans will come out this weekend and see some great volleyball.”

Fans are also urged to participate in the SEC’s “Together was CAN” drive. Donations will be accepted at both matches this weekend. All proceeds from LSU will benefit the Greater Baton Rouge Food Bank.