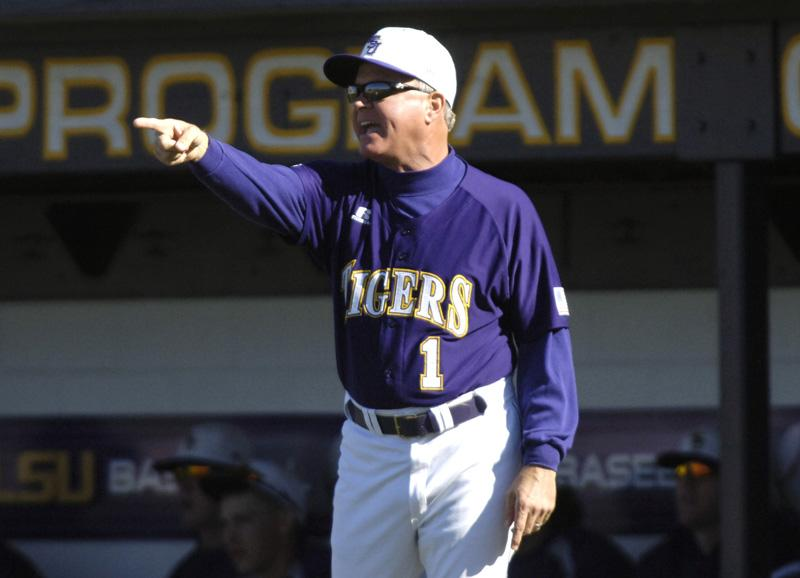 by Greg Johnson
The NCAA News

(From The NCAA News) So far, the only thing that has slowed LSU baseball coach Paul Mainieri during his two-plus years in Baton Rouge is Hurricane Gustav.

After the powerful storm blew through Louisiana earlier this month, Mainieri went 12 days without power, and his baseball team had to postpone the start of fall practice for two weeks while the clean-up efforts continued.

The LSU baseball program has undergone its own reclamation project since Mainieri was hired in June 2006. Besides returning the program that won five College World Series between 1991 and 2000 to national prominence on the field, the program recorded a perfect 1,000 Academic Progress Rate for the 2007-08 academic year.

“Having gone into this profession to be an educator and teacher, it is of course important for youngsters to fulfill their potential as baseball players, but it is even more important for them to earn their degrees and become contributing people in society once they finish their playing careers,” Mainieri said.

Last spring, LSU baseball student-athletes posted a cumulative 2.89 grade-point average, the highest in-season mark in program history. For the entire 2007-08 academic year, the team posted a 2.83, another high-water mark for the program.

Fourteen LSU baseball players ? again the most in program history ? were named to the 2008 Southeastern Conference Academic Honor Roll.

“I realize those numbers are modest by some people’s standards, but it is a start,” said Mainieri, who guided last year’s squad to the CWS for the first time in four seasons behind the strength of a late-season 23-game win streak. “I feel proud. I’m hoping this will be the start of a trend, and not only will we succeed on the field, but the kids will go on to be productive citizens.”

Mainieri, whose parents both were teachers, was one of three coaches appointed to the Division I Baseball Academic Enhancement Group in 2006-07. He said he has always stressed both sides of the student-athlete experience.

Before arriving at LSU, he was the head coach at Air Force for six years and at Notre Dame for 12. All 71 of the players who completed their eligibility while Mainieri guided the Fighting Irish earned a degree.

He is quick to point out that the academic success at LSU is far from a one-man job.

The institution has a 90,000 square-foot facility that houses an academic center for student-athletes.

“Becca Hubbard is our academic advisor for baseball,” Mainieri said. “This has been a collaborative effort between her staff and the baseball staff. Now, the players understand what the expectations are. The kids are meeting those expectations.”

Mainieri can point Tiger student-athletes toward his own example. During his collegiate career, he attended LSU as a freshman, where he met his future wife, Karen. He then transferred to Miami-Dade North Community College, where his father was the baseball coach, athletics director and chair of the physical education department.

He finished his career at New Orleans, after which he signed to play professionally in the Chicago White Sox organization. Still 18 hours short of his degree, Mainieri attended Florida International University in the offseason to earn it. He also obtained a master’s in sports administration from St. Thomas (Florida) University.

He also has a full grasp of the academic-reform effort in Division I.

“I didn’t necessarily agree with every single rule that our working group put in place,” Mainieri said. “If it was totally up to me, there would be some adjustments that we put together on that committee. But the reality is that the package was passed the way it is now. There is a lot being asked of coaches.”

Mainieri has chosen to accept the challenges and set an example of how success can be measured. When he arrived at LSU, the program’s APR was 903. Even with the 1,000 mark, the four-year number is around 920, but that is still below the 925 minimum at which teams are subject to penalty.

“I know we have the resources with staffing and facilities to help our student-athletes achieve what they did in the classroom,” Mainieri said. “Other schools may not be as fortunate, so success is relative when you look at each school. At least, I hope that LSU can prove that one aspect of the student-athlete’s life doesn’t have to be sacrificed to achieve success in other aspects. I hope we’ve shown it is possible to make it to the College World Series as well as achieve a 1,000 APR.”