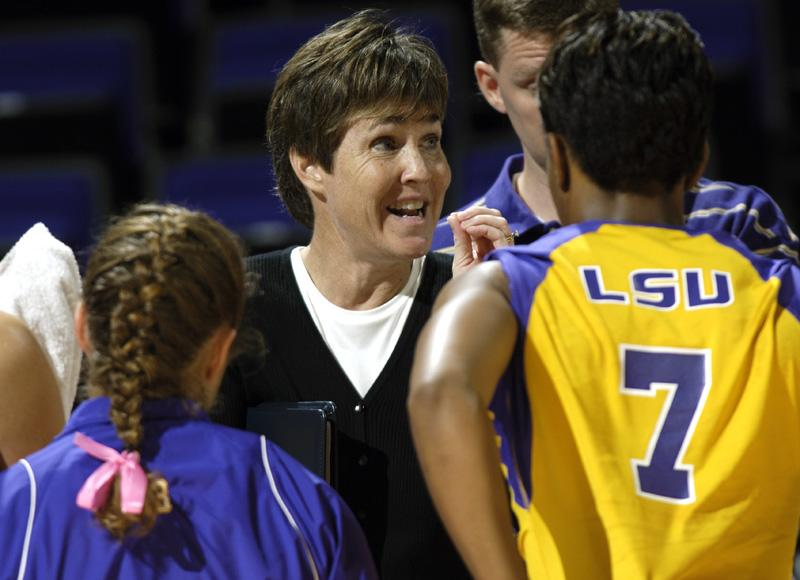 BATON ROUGE — LSU volleyball head coach Fran Flory spoke to the media at Walk-On’s Bistreaux on Tuesday and discussed this weekend’s home-opening matches versus Tennessee and Kentucky and also discussed the new entrance and seating configuration in the Maravich Center for this season’s matches.

The Tigers were supposed to play host to a tournament at home on Sept. 5-6 but it was cancelled because of Hurricane Gustav. Instead the Tigers made a late entry into McNeese State’s tournament that weekend and have played their first nine matches on the road this season, compiling a 5-4 overall record with three tough losses to top-15 teams.

But now LSU will continue its SEC slate and try to rebound from an 0-2 start in conference against the Lady Vols on Friday at 7 p.m. and the Wildcats on Sunday at 1:30 p.m.

“I think playing these matches at home is vital,” Flory said. “We feel more comfortable on our home court than any place else. This team has to turn the corner and we will look to our senior leadership. We can be very successful on our home court and I think they will lead the way just fine.”

When the Tigers do play their matches in the PMAC this season, there will be a noticeable change to the configuration.

Seating for volleyball matches from now on will be limited to the lower bowl of the Maravich Center in the 100 sections only. Doors open an hour and a half before each match, and fans with general admission tickets should enter through the lower southeast, southwest and northwest entrances only instead of on the concourse level as in previous years. Credentialed personnel should enter through the lower northeast corridor.

Ticket sales and will call will be in outside ticket windows at the southwest corridor as will the fan zone and merchandise tables. The ticket booth will remain open through the second set of all matches. Students and faculty using ID cards as well as those on the player pass list to enter volleyball matches are to use this southwest entrance.

For families coming to experience LSU volleyball, the Kid Zone will be located on the floor level of the northwest corridor.

“This is actually something I’ve wanted for a long time,” Flory said. “Other facilities in the SEC are much louder in terms of the homecourt advantage. We have been successful because we have been very good on our home court. We feel like our great and rowdy fans will add to the atmosphere. But you cannot truly feel it until they are closer to you. I feel it’s going to be a great thing. It’s really going to bring the emphasis into the middle of the court and hopefully you don’t feel that you are in a huge building with tiny things going on on the floor.”

Opening Statement
“I was a little disappointed about this past weekend. I’m not surprised that South Carolina was a great team. I was surprised to see how our team responded to the adversity and the crowd. I think it showed that we have a lot of veteran players who have played a lot of volleyball but not a lot as a team. Not having Marina Skender in the lineup, we can’t dwell on but the leadership we lost is now becoming more and more apparent. Our veterans had a big meeting after South Carolina and they decided they would make a change. I think they played a great game against Florida on their home court. We had opportunities to turn the match and get to a fifth game but we did not capitalize on it unfortunately. We were much closer than we have been and I was proud how they rebounded in a tough situation. I think our leadership will setup at this point. We are so happy to be home this week. We have seen a little wear and tear being on the road so much. We are really excited about having Tennessee and Kentucky ? two very good teams. They will both come in ready to go. One of Tennessee’s players went down with a knee injury so they have a little inexperience as well. I picked Kentucky to be at the top of the SEC, they are a veteran team, very physical and they are very capable of playing high level volleyball. Between starting with South Carolina and Florida and now these two teams, we are starting with toughest matches in the SEC. Great teams overcome great challenges and I think this team will do that.”

On what playing home matches means for the team’s confidence…
“I think playing these matches at home is vital. We feel more comfortable on our home court than any place else. This team has to turn the corner and we will look to our senior leadership. We can be very successful on our home court and I think they will lead the way just fine.”

On where the team is now compared to her expectations…
“I think we are pretty close but we might be a bit below because I did not want to give the match to South Carolina. I knew South Carolina on the road would be a tough opener for us. It was a match I was prepared for but I don’t know if our team was prepared for. We played South Carolina in the spring and we beat them. But a lot on the mentality is what happens in the fall occurs in the spring. If you blow a team out in the spring then that’s going to be the same team you face in the fall. We did not approach that match very good mentally. They got up and rolling. We now play a 25-point set and that really gets on you. If you don’t start in the set quickly the other team will capitalize. You can’t have the lows or the mental errors. I think our team is still adjusting to that a little bit.”

On strugging with the offensive system …
“I think we need to create better schemes in our offense to put the ball in the right situation. We have basically two new setters. We are trying not to call the plays from the bench because it’s very difficult to do. It’s a big challenge to have that occur and you become very predicable if you have to do that because there is so much information. We are trying to allow them the freedom and we have to have them step up.”

On if Brittney Johnson will see more time at setter this weekend …
“We made a change in the Florida match because Johnson is a little quicker to the ball. Our passing and our first ball contact was not good against Florida. So we thought she would create a little more for us offensively. Sam is the veteran and she understands how to win and what needs to be done. If we can get the ball into her hands we can be successful. But if our first ball control is not what it should be then Johnson will certainly play a vital role to improve that.”

On losing confidence because of the losses …
“I don’t think we are losing our confidence, I just think we did not step up to our challenge this past weekend. I think they still believe in themselves and we truly believe in this team. I think this team is a special group. When you have a special group it’s not just about the talent or the mentality. The right things must fall into place for your season to be successful.”

On the new configuration of the PMAC…
“This is actually something I’ve wanted for a long time; I think the PMAC is too big for us. Having everyone on one side, we’ve tried in the past to do this. Other facilities in the SEC are much louder in terms of the homecourt advantage. We have been successful because we have been very good on our home court. We feel like our great and rowdy fans will add to the atmosphere. But you cannot truly feel it until they are closer to you. This is something I have asked for, for a very long time. I’m really excited about it and it’s going to be very nice. They decided at the end of last year that we could do this. The construction was a big help and I think that helped me a little bit. The upper concourse in wonderful and the renovations that Skip (Bertman) did are great, we didn’t want to exclude people from that. We should definitely honor all the athletes that have played all the sports before our current teams. I feel it’s going to be a great thing. It’s really going to bring the emphasis into the middle of the court and hopefully you don’t feel that you are in a huge building with tiny things going on on the floor.”

On will this continue for future seasons…
“My aspirations are to continue this through the seasons. We have not seen it yet so we don’t know how exactly it’s going to work. We have banners that will partition some things off. The only way to see if the concept works is to implement it and see if we get the effects we are looking for.”

On having the fans behind the team …
“We would love to have everyone behind us. When we play at the outside, Kentucky will have 3,000 fans in the stand. When we play at other SEC venues there are 2, 000 and 3,000 people there. We’d love to have that type of environment welcome us to the PMAC on Friday night and certainly again on Sunday afternoon. To be able to say that you guys have done a great job so far and we are behind you. Hopefully the fans will come out this weekend and see some great volleyball.”