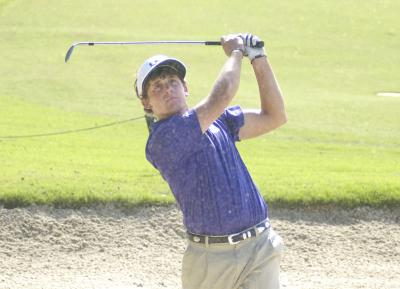 BIRMINGHAM, Ala. — Despite opening play with a 13-over 301 in the first round, a young but resilient LSU men’s golf team showed its character by firing the lowest team total at even-par 288 in Monday’s second round to finish the day in second place at the Shoal Creek Intercollegiate.

The Tigers, who finished the morning round in a tie for seventh place, bounced back in a big way in the afternoon to sit in sole possession of second place at 13-over 589 for the championship.

LSU held a share of the lead in the team standings at even-par after the first eight holes of the first round, but quickly fell back into 12th place after playing the next four holes at 11-over as a team. But the Tigers kept their focus and finished the final six holes at 2-over to move up five spots into a tie for seventh heading into the afternoon round at Shoal Creek Country Club.

That is when the Tigers put their talent on display as sophomore Andrew Loupe, sophomore John Peterson, freshman Josh Jones and freshman Sang Yi combined for the best team score of the day at even-par 288 during the second round of competition.

LSU finished the day alone in second place and eight shots out of the lead as Baylor will carry the title of favorite heading into Tuesday’s final round after posting a 5-over 581 on Monday.

Jones showed the maturity of a seasoned veteran with his play on the first day of the event, holing out with three straight birdies at the end of his first round to finish with a 1-over 73 before firing a season-low 2-under 70 in the afternoon to finish the day in a tie for third place on the leaderboard with a 36-hole score of 1-under 143. Jones trails UAB All-American Zack Sucher by two shots in the chase for medalist honors after Sucher finished the day at 3-under 141.

Both Loupe and Peterson have also put themselves in a position to earn a Top 10 finish this week as they finished the second round in a tie for 15th place in the individual standings.

The duo carded matching 36-hole scores of 4-over 148 with Loupe recording rounds of 3-over 75 and 1-over 73 and Peterson adding rounds of 4-over 76 and even-par 72 on the day. Both are two shots out of the Top 10 of the leaderboard heading into the third and final round on Tuesday.

Yi, who was the team’s top finisher a week ago by tying for fifth place at the Gopher Invitational, followed a 5-over 77 in the opening round with a 1-over 73 in the second to finish the day in a tie for 21st place overall with a two-round total of 6-over par 150.

Sophomore standout Clayton Rotz matched Yi’s effort with a 5-over 77 in the first round but was forced to withdraw from the tournament after nine holes in the afternoon due to an injury and will be unavailable to compete in the final round. LSU will be unable to replace Rotz in the lineup and will count all four scores toward its team total in the final round of competition.

The Tigers are paired with Baylor and Ole Miss in Tuesday’s final round and will tee off from the front nine beginning at 9:54 a.m. CT. Live scoring of the third and final round will be provided by Golfstat and can be found online by logging on to www.golfstat.com.