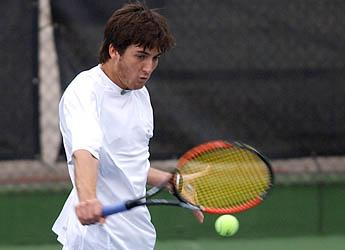 Kicking off his senior campaign, Tragardh defeated Samford’s Kelvin Dewet in the opening round of the tournament, 6-1, 6-1.

The California native moved through the brackets to defeat second-round opponent Arkansas Dmitry Lebedev with a mark of 7-5, 6-4, catapulting him into the third round of competition.

In the third round of play, Tragardh went head to head with Rice’s Tobias Scheil, in which Tragardh fell to Scheil, 6-4, 6-3.

Newcomer Mark Bowtell also made an impact in his first showing as a Tiger. Bowtell had a back and forth match with USM’s Domagoj Anic. After Bowtell posted a 6-4 first- set victory, he fell in the final two sets by a close mark of 7-6, 7-6.

Due to inclement weather, the doubles portion of the tournament was canceled.

“We were able to get in a few matches despite the rain. It was helpful because we gained valuable experience after the time spent out due to Hurricane Gustav,” head coach Jeff Brown said.

Select members of the LSU team will travel to Tulsa, Okla., to open the play in D’Novo All American Pre-Qualifying starting Oct. 3.