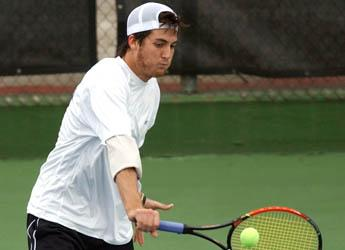 Jonathan Tragardh defeated Samford’s Kelvin Dewet in straight sets, 6-1, 6-1, to give the Tigers their first win of the tournament.

Giving the Tigers their second singles win was David Roberts as he defeated Olliver Cuthill of UNO, overcoming a mid-match rain delay. Trailing 3-0 at the delay, Roberts rose to defeat Cuthill, 6-3, 6-1.

“David did a good job of keeping his concentration up despite the rain delay,” said head coach Jeff Brown.

In addition to winning his singles match, Roberts joined with teammate Cody Loup in the 8-6 defeat of No. 2 seed Brian Dushock and Kelvin Dewet of Samford.

The LSU duo of Ryan Lissner and Curt Maddox were in heavy competition with Abilene Christian’s Luke Hawk and Brian Joiner, 7-4, as the match was suspended due to inclement weather.

Matches will resume at 8:30 a.m. Saturday morning on the Cajun Courts.